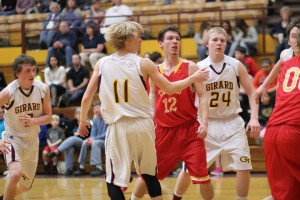 Girard’s first game against the Columbus Titans ended 55-45 in favor of Girard, and Tuesday night once again ended in a Trojan victory.  A first quarter six-point deficit would be the largest the Trojans’ would face all night, and that was trimmed to two points at the end of the first.  Drew Davied led Girard with six points in the quarter, and the Trojans trailed 14-12 heading into the second.  Austin O’Dell picked up four points in the lane while trading baskets with Columbus, but it was Laike Damman who led Girard to a 27-23 halftime lead, with seven points in the quarter.

The Titans were able to trim the lead to three points by the end of the third, but that was as close as they would come.  Damman put in another five points in the final period, and although Columbus would cut the lead to three yet again with less than 30 seconds on the clock, a Tyler Green layup would seal the 48-43 victory for the Trojans.  The Trojans were led in scoring by Damman with 12, while Davied put in 11.  The Trojans were without senior leader Devin Alters, and he may be ruled out for the remainder of the season due to a lingering shoulder injury.  With the victory, Girard is now an even 9-9 on the season, and 3-2 in league play.  Friday night Girard will face off against Southeast at home.