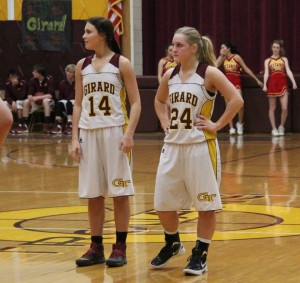 Girard faced Columbus Tuesday night for their second matchup of the year, and Columbus came out victorious yet again.  In the first quarter, after a Carly Heatherly basket, Columbus would go on a 10-0 run to take an 11-2 lead before Girard would once again get on the scoreboard.  The Lady Trojans ended the quarter strong with a pair of Calea Augustine free throws and a layup from Olivia Hanson to cut the lead to 11-6.  Augustine went on to score eight more points in the second, helping the Lady Trojans tie the game at 22 at the half.  Augustine went 6-6 from the free-throw line in the quarter, while Girard scored 12 of their 16 points from the charity stripe.

Heatherly and Olivia Hanson did their best to keep things close in the third quarter, both scoring four points, but the Lady Titans were able to take a 37-34 advantage into the final period.  After falling down by 10 points in the fourth, Megan Gray hit back-to-back threes for Girard, but despite her efforts, Columbus was able to seal the 52-47 victory.  With the loss, Girard is now 3-2 in league play and 7-11 overall.  Girard will host the Southeast Lancers on Friday night.