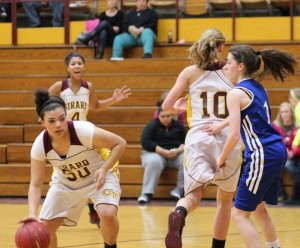 In last night’s matchup against the Lady Panthers of Colgan, Girard jumped out to a large first quarter lead that carried into halftime, but let it slip away in the third quarter.  After one quarter of play, the Lady Trojans jumped out to a 20-10 lead.  After leading 7-6, Girard went on a 13-6 run, with seven points belonging to Carly Heatherly during that stretch, including a three pointer.  The second period was pretty even with Girard taking the quarter 12-11, and entering halftime with a 32-21 lead.

The Lady Trojans went cold on offense in the second half, as they only scored 5 points in the two quarters combined.  A Heatherly layup and a free throw from Ashley Ray would be all Girard would score in the third, while Colgan scored 16 points, including three straight three-point baskets to bring them within one point after being down by 10 points.  Although Girard would hold the Lady Panthers to just five points in the fourth, they would only score two points of their own.  Hannah Jones hit two free throws in the fourth for all of the Lady Trojans’ points, and Girard would lose 42-37.  The Lady Trojans are now 7-10 on the year, and will play their final three games at home:  February 18 versus Columbus, February 21 versus Southeast, and February 25 against Frontenac.  If they win all three games, Girard still has a possibility of being named CNC league champions.