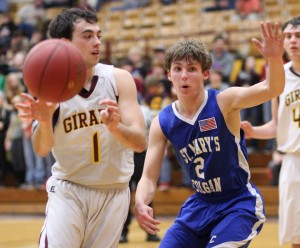 Girard built an 18-15 lead after the first quarter against Colgan, but wouldn’t hold on to it much longer.  Tyler Green led the way for Girard in the first, scoring six points for the Trojans.  Six players scored two points apiece to add the other twelve.  After falling down by four early in the second, Colgan went on an 11-0 scoring run to take a 26-19 lead before Girard would make another basket.  A Laike Damman trey cut the lead down to three points later in the quarter, but that would be the closest the game would be the rest of the way.

The third quarter was all Colgan once again, as they outscored Girard 24-12 in the period.  Although Girard outscored the Panthers 20-15 in the fourth, they were still dealt a 77-63 loss.  Austin O’Dell led Girard in the scoring department, finishing with 14 points on the night.  Drew Davied added 13 and Damman scored 11.  Green and Devin Alters each had nine apiece.  For Girard, now 2-2 in league play, their final three games will all be held on their home court.