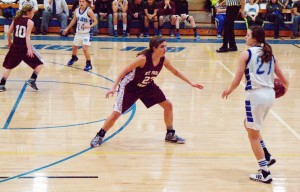 Jordyn Tuck put in one of her best overall performances Thursday night vs. Pleasanton.

In what was set to be a Three Rivers League juggernaut of a matchup, St. Paul went into last night’s game versus Pleasanton undefeated in league play, while Pleasanton had only lost one previous league matchup, and with a win could have had a shot at a share of the league title. However, as the night progressed, the Lady Indians proved to be too much to handle for the Pleasanton Blu-Jays.

St. Paul struggled to find their rhythm offensively in the first quarter, but three-pointers from Camri Burke, Jordyn Tuck, and Keyahnah Burk helped the Lady Indians to a 14-6 lead after one.  Tuck led the Indians to a 32-19 halftime lead with seven points in the second quarter. 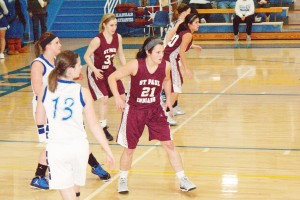 Josie Albertini and the St. Paul Lady Indians shut down the Blu-Jays offense.

The Lady Indians cooled off slightly in the third period, only scoring 12 points, with Ashton Wood leading the way five in the quarter.  St. Paul led 44-27 going into the fourth.  Free throws accounted for 12 of St. Paul’s 22 fourth-quarter points, while Josie Albertini knocked down six of those free throws to help her score 12 in the fourth.  Albertini and Tuck each scored 18 for the Lady Indians, while Wood added in 10.  When the final buzzer sounded, St. Paul wo uld walk away with a 66-41 victory.

With no game tonight, the Lady Indians’ next game will be Tuesday at Chetopa.  In their first matchup, St. Paul rolled to a 47-18 victory.

In the boys’ game, St. Paul could never get rolling against Pleasanton.  Pleasanton got out to a 19-8 lead after the first quarter, and would cruise to a 57-36 win.  Drake Carter led St. Paul with 10 points on the night, including two triples.  The Indians will look to redeem themselves next Tuesday versus Chetopa, as they lost 57-44 in their previous matchup this season.