Not only did the Girard Trojans come out a little rusty versus Southeast in the first half, Southeast intensified the pain by shooting lights out.  Three-pointers for Drew Davied and Laike Damman out of the gate gave the Trojans an early 6-4 lead, but a Davied three-point basket that was called off due to an offensive foul underneath proved to be a blow for the Trojans.  After Damman’s three-point bucket, a Southeast free throw was followed by back-to-back treys to give the Lancers an early 11-6 lead that they would extent to 17-11 going into the second quarter.  In the second, Eric Wilson picked up a rebound and put it up and in to cut the lead to three points, but the Lancers would go on a 10-0 run from that point that included two more triples, to take a 35-22 lead into halftime. 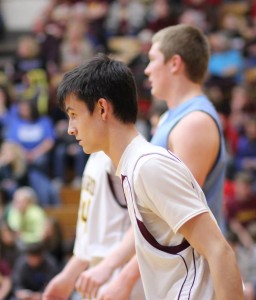 The Trojans were able to cut the lead to 10 points going into the fourth, but they traded baskets with the Lancers all throughout the quarter, never being able to get much closer.  Davied put in 12 in the final period while Damman scored 7, but Girard would fall 63-54 in the league matchup.  Now 9-10 on the year, the Trojans will play Frontenac Tuesday night at home for their final regular season game.