After leading for most of the game, Girard fumbled the lead in the last 1:30 of the game and fell to Southeast 40-36.  The Lady Trojans were rolling in the first quarter, thanks to an 11-1 run that put them ahead 15-6 at the buzzer.  Carly Heatherly scored six points in the first, helping Girard to the big lead.  Southeast made a comeback in the second quarter, outscoring Girard 13-6 to go into halftime trailing by just two points, 21-19. 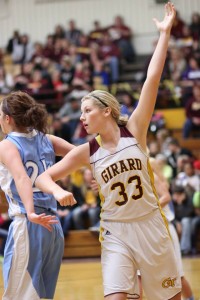 After falling behind 21-23 early in the third quarter, the Lady Trojans went on an 8-0 run to help them to a 29-25 lead going into the fourth. Calea Augustin scored four of her team-high ten points in the third.  Early in the fourth, Southeast was able to tie the game at 29 with back-to-back baskets, but Hannah Jones answered with two mid-range jumpers to push the lead back to four.  Two free throws from Augustin and one more from Heatherly maintained the four-point lead, until Southeast nailed a three with 1:30 to go and followed it up with a layup 15 seconds later to take the lead, 36-35.  Girard fought until the end, but the Lady Lancers were able to come out on top, 40-36.  Now 7-12 on the year, Girard will face the 16-2 Lady Raiders of Frontenac next Tuesday at home.