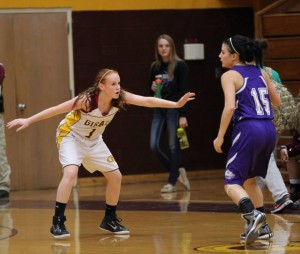 The Lady Trojans dropped to 0-2 on the year losing to Pittsburg on Tuesday night. PHOTO BY JOYCE KOVACIC

Girard hosted Pittsburg Tuesday night, and the results were split in the two varsity games. The Lady Trojans would lose handily 61-39. The boys, however, in a juggernaut of a game, held on to beat the Purple Dragons 57-54. More on that later.

In the girls’ game, the first quarter finished with Girard on top, 13-12. Calea Augustine scored five points in the quarter, including a three-point basket, and Sydnee Crain added four. The Lady Purple Dragons turned it up a notch in the second quarter, outscoring Girard 18-9, and took a 30-22 lead into the break. The wheels fell off for Girard in the third, as Pittsburg scored 21 points while holding the Lady Trojans to just six. Girard outscored Pittsburg by one point in the final quarter, but the Lady Purple Dragons still landed a 61-39 victory. Girard was led in scoring by Ashley Ray with nine points, while Augustine and Crain each scored eight. Taylor Muff of Pittsburg led all scorers with 20 points.

With the loss, Girard fell to 0-2 on the season and will host Baxter tomorrow night.

Trojans hold on to win 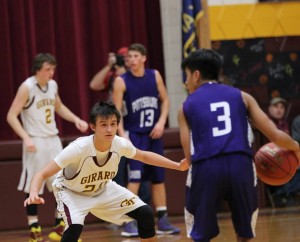 After the first quarter of Tuesday’s game, Girard held a 16-5 lead and it appeared they could run away with it. Laike Damman and Drew Davied each scored five points in the first quarter, and they each hit a trifecta to help the Trojans control the quarter. Pittsburg stormed back in the second quarter, outscoring Girard 18-6 to cut their halftime deficit to 24-21.

In the third quarter, Eric Wilson (pictured) poured in seven points, and Damman added five to help the Trojans gain a five-point lead heading into the fourth. Pittsburg outscored Girard 17-15 in the fourth quarter, but it was not enough to top the Trojans, making it a 57-54 Girard victory. Davied led Girard with 14 points, and Wilson finished with 12. Damman scored 10 in the game. Kyle Smith led Pittsburg and all scorers with 24 points in the game, including 11 in the fourth A large part of Girard’s win came from the free-throw line. Girard was 8-13 from the charity stripe, while Pittsburg only managed to hit 3-11 in the game.

With the win, Girard improved to 2-0 on the young season and will host Baxter tomorrow night.