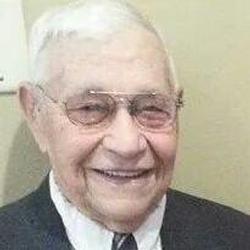 He was born on December 27, 1926 in Englevale, Kansas to Joe Modica and Maggie (Marchello) Modica. He grew up in Crawford County and graduated from Hepler High School in Hepler, Kansas. He then joined the United States Army Air Corps and served during World War II in the Philippine Theatre. Following his discharge he returned to Walnut and farmed and ranched. He also worked as an oil well driller for thirty years.

Mr. Modica was a member of the former St. Patrick’s Catholic Church in Walnut, and currently a member of St. Ambrose Catholic Church in Erie. He was also a member of the American Legion Post #292 of Walnut and was a charter member of the Ruritan Club. Mr. Modica served in every office on the local and district level in the Ruritan Club. He served as a project leader and community leader in the Walnut Wonder Workers 4-H club. He also enjoyed hunting with his family and friends. He and Pearl enjoyed spending time at their lake house with their grandchildren.

Shirley A. Johnson and her husband Ken Parsons, Kansas

In addition to his wife, he was preceded in death by three brothers.

Memorials are suggested to the St. Jude Children’s Research Hospital. These may be left at or mailed to Forbes-Hoffman Funeral Home, P.O. Box 374, Parsons, KS 67357. Online condolences may be left at www.forbeshoffman.com.