After three quarters of play, the Lady Trojans of Girard led Iola 25-20, but were outscored 20-10 in the final quarter to drop their season opener, 35-40. In the first quarter, Girard was down 2-5 when freshman Sydnee Crain scored two straight baskets to give Girard their first lead. At the end of the first, the Lady Trojans led 8-7.

Girard remained consistent in the second quarter by putting up another eight-points, with four players picking up a two-point field goal. At the break, Girard held a 16-9 lead. Coming out of intermission, Iola nailed a trey to cut the lead to four points, but Calea Augustine answered with a layup. From there, Iola went on a 6-0 run to tie the game at 18, but two made shots by senior MaCahla Leslie helped the Lady Trojans secure a 25-20 lead going into the fourth quarter.

Iola took their first lead since the first quarter at the 4:00 mark after a 6-0 run to start the quarter. Girard was never able to regain the lead, and was down eight points at the end of the game before a meaningless three-pointer by Crain with the clock running out.

For Girard, Leslie led the team in scoring with nine points, and sophomore Ashley Ray scored eight. Crain finished with seven for the Lady Trojans.

With the loss, Girard falls to 0-1 on the year and will host Pittsburg on Tuesday, December 9. 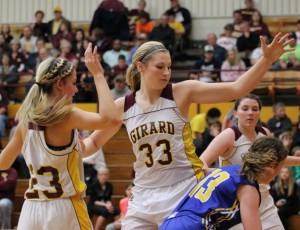 The Lady Trojans led most of the game but fall in their season opener to the Iola Mustangs. Ashley Ray (Pictured) had 8 points while MaCahla Leslie led the team with 9. PHOTO BY JOYCE KOVACIC