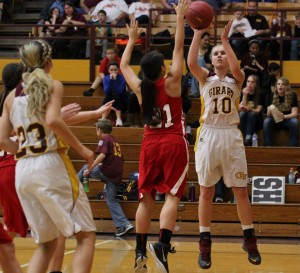 Calea Augustin lead Girard with 19 points. The Lady Trojans earned their first victory of the season in a dominant 2nd half performance over the Lady Lions of Baxter Springs. PHOTO BY JOYCE KOVACIC

After the first half of action Friday night, it appeared Girard and Baxter Springs were going to have a neck-and-neck game down to the wire. The Lady Lions’ full-court press was suffocating Girard, and the Lady Trojans coughed up a lot of possessions. Baxter held a 15-13 advantage after the first quarter. In the second, Girard calmed down and handled Baxter’s pressure much more effectively, resulting in a 19-point quarter. Olivia Hanson hit three out of four free throws in the final 3.8 seconds of the half and gave Girard a 32-31 lead going into the break.

In the third quarter, Girard poured it on the Lady Lions. The Lady Trojans amped up their intensity on defense, and their offense settled into a nice rhythm behind Sydnee Crain’s nine points in the quarter. Calea Augustine scored six of her game-high 19 points in the third as well and was a big part of the defense’s success. After three quarters, Girard led 55-41.

Girard was able to put the game on cruise control after Augustine nailed a three at the start of the fourth, and Girard would go on to win 66-50. Along with Augustine’s 19 points, Crain added 14, and Hanson had 10.

With their 1-2 record, the Lady Trojans will travel to Anderson County on Tuesday, before playing at Coffeyville on next Friday.