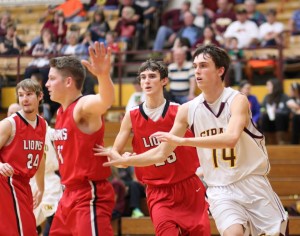 The Trojans improve to 3-0 on the season with a 53-47 win over Baxter Springs. PHOTO BY JOYCE KOVACIC

Girard hosted and beat Baxter Friday night 53-47, and although it was close throughout and the ending margin was only six points, this game never really felt close.

In the first quarter, Laike Damman started the game with two three-pointers to give Girard an early six-point advantage. Baxter fought back and took a one-point lead, but Damman hit two more treys to help keep Girard in front 17-14 after one. Baxter’s length gave Girard fits all throughout the first half, and in the second quarter, Girard lost its rhythm on offense and was held to 11 points. Luckily for the Trojans, their defense played very well, holding Baxter to nine points in the second.

Girard held a 29-20 lead at halftime, and Damman led the team with 15 points on five trifectas. Girard became stagnant at times in the second half, and Baxter took advantage in the third, cutting the lead to 39-36 going into the fourth quarter. The Lions were able to bring the game within two points, but could never get over the hump in their losing effort.

For Girard, they looked like a team playing with a 20-point lead instead of one on the verge of defeat. Damman led the Trojans with 19 points; Junior Lindbloom and Tyler Green each scored six points for Girard.

Girard will head to Anderson County on Tuesday, and will travel to Liberal on Friday of next week.