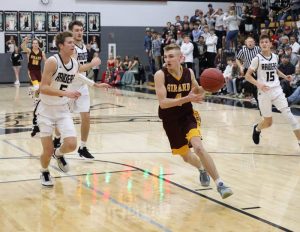 Junior Ryder Worrell drives to the basket Friday, Jan. 11, in their matchup against the Frontenac Raiders where the Trojans prevailed 60-47. -Photo Courtesy: Ron Gates

Over the past years, the Frontenac and Girard rivalry has grown to be one of the biggest in the area. Friday, Jan. 11, you could feel the tension and energy in the gym as the two teams looked to battle it out for CNC supremacy.

In the Lady Trojans the last matchup, it was an easy win as they went on to win 59-29 over the Rams, improving to 5-1 overall. Their next opponent, Frontenac (3-3), looked to defeat the Trojans on their home-court. The crowds were roaring throughout as it was a packed gym for this highly anticipated matchup.

Senior key player Gabbi Sands did not play the game against the Raiders due to a leg injury.

The Raiders found the edge to start the game, off hot shooting from the three as well as executing off sloppy turnovers from Girard. But the Trojans would keep the game within reach off terrific post play from the duo of freshman Faith Poland and senior Kalyn Flaharty.

Both teams pushed the tempo throughout the game as it seemed to be a track meet with the number of transition points. Frontenac’s hot shooting would put the Raiders ahead of the Trojans at the half 32-24.

In the second half, Girard came out with a different mentality as they slowly and surely cut the Raiders lead as their press defense gave the Raiders problems. Junior Brittley Bailey scored the Trojans first 6 points in the third helping the Trojan’s comeback effort.

From being down double digits at the beginning of the third, the Lady Trojans were able to cut it within one point, 44-43, heading into the fourth.

Both teams would exchange baskets throughout the fourth as the last couple minutes of the game ultimately decided the winner.

Girard’s duo of Flaharty and Poland sealed the game for the Trojans scoring off second-chance rebounds and clutch free throw baskets.

The Lady Trojans would go on to win 58-54 over the Raiders improving to 6-1 on the season and maintaining their undefeated league record of 4-0.

“Overall, thought we had a lot of composure down the stretch, saved our timeouts till the end and talked it over which really helps our girls,” said Coach Brad Herlocker.

Freshman Faith Poland came up huge for the Trojans leading the game in scoring with 12 points. Senior Kalyn Flaharty was the second leading scorer with 8 points on the night.

Both teams would come out of the gate slow, but Girard executed their plan of pressure defense which in return created transition opportunities.

Frontenac had no answer for the post presence of seniors Carter Doherty and Caleb Muia in the second as they would take advantage of Frontenac’s mismatches. Muia would reach double-digits in the first half as well (10).

In previous games, Girard has pushed the ball in a more up-tempo fashion, but against the Raiders, the Trojans switched to a more half-court style of play. At the half, Girard held the advantage leading the Raiders 26-17.

Senior Evan Troike scored the Trojans first 5 points of the third quarter bringing the much-needed energy for Girard. The Trojans pushed the lead to double-digits as the pace would pick up more for Girard with Frontenac not able keep up.

Junior and key player would leave midway through the third quarter and not return due to a leg injury suffered during the game.

The loss would not phase Girard whatsoever as the Trojans prevailed 60-47 over the Raiders improving to 7-0 overall, maintaining the top spot in the CNC.

“We lost a good ball handler tonight…younger kids stepped up and handled the pressure well which helped us get the win,” said Coach Rod Wescott.

Muia led the game in scoring with 21 points on the night. Troike would finish in double-digits as well with 10 points. Other key contributors include Dillon Collins (9), Carter Doherty (9).