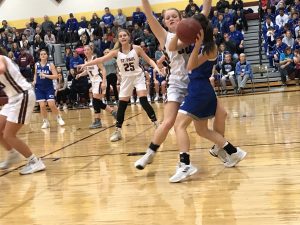 Freshman Emily Struthers locks down on a Colgan player as the Lady Indians would prevail 43-42 over St. Mary’s.

The St. Paul Indians’ girls’ and boys’ basketball teams stayed home in their most recent contest against the St. Mary’s-Colgan Panthers, Friday, Jan. 11.

On the girls’ side, St. Paul is coming off a solid 51-27 victory over Moran/Marmaton Valley.

In the first, the Lady met at a stalemate scoring an equal 6 points as neither team could find their groove offensively.

St. Paul scored an additional three points in the second quarter as the offense came at a premium. Colgan scored five more points taking the lead and beginning to wake up. At the half, the Indians trailed the game with a score of 9-11.

St. Paul stepped up their performance in the third quarter, scoring eight points but the Panthers remained hot scoring 18 as the Lady Indians trailed 17-29 heading into the fourth, needing a big effort.

In the fourth quarter, St. Paul outscored the Panthers as they were able to hold Colgan to only 13 points while the Lady Indians scored a doubling amount of 26 points.

The final score of the game came to 43-42, as the Indians made a tremendous comeback effort just at the right time.

St. Paul’s Lady Indians improve on the season to 7-1 overall while maintaining their undefeated league streak of 5-0.

Junior Katie Coomes came up huge for the Indians scoring 17 points. Junior Emily Hutcherson came up big as well for St. Paul as she finished the game with 8 points.

The Lady Indians will face Pierce City (MO) in their next matchup, Jan. 14, in the Southeast-Lancer Classic.

In the boys’ game, St. Paul (5-2) had a tough time against the always dangerous Colgan boys’ team.

In the first quarter, St. Paul earned themselves eight points, but the Bulldogs couldn’t miss as they scored 22, breaking open the lead.

The second quarter revealed much of the same aggressiveness from both teams, as St. Paul scored 7 points but Colgan kept pouring it on scoring 7 points. At the half, the Panthers led by 21 points with a score of 15-36.

From there the Indians efforts weren’t enough as Colgan’s shooting and depth became too much to contain as the Panthers prevailed 56-29 over the Indians.

Junior Chase Bradshaw would be the only Indian player in double digits with 12 points total on the night.

Coach Wiatrak and his Indians team are now 5-3 on the season and they still maintain an undefeated league record of 5-0 heading into their next game.

St. Paul’s boys’ teams next matchup will be at the Southeast-Lancer Classic which kicks-off this Tuesday, Jan. 15, against the Southeast Lancers.