Trojans come up short against Bulldogs 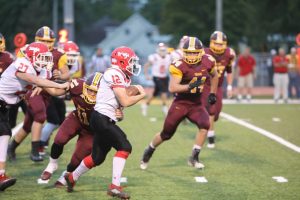 Junior Caden Lallemand (11) makes a tackle on an Anderson County running back in the Trojans matchup with the Bulldogs last year, Sept. 28, where the Trojans won 35-21. -PC: Ron Gates

Last week for Girard football, Sept. 27, the Trojans narrowly escaped the Burlington Wildcats 20-16. This brought the Trojans back to a record of 2-2 (.500).

Following the victory, Girard traveled to Anderson County Oct. 4 to compete in a district matchup against the Bulldogs (2-2). The Bulldogs came into the game off a victory to a winless Iola Mustangs, 35-6.

On the first drive of the game, Girard’s option attack gave the Bulldogs troubles as the Trojans drove the ball down to the goal line. Junior quarterback Caden Lallemand would then put up the first points of the game on a 3-yard run up the middle. Freshman Ethan Davidson made the extra point putting the Trojans up 7-0 to start the game.

Early in the second quarter, the Bulldogs slowly started to gain momentum as the Trojan offense began to go stale. Taking advantage of slow play from Girard, the Bulldogs took the lead on a 15-yard touchdown pass up the middle with the two-point conversion good as the Bulldogs lead 14-7.

Unphased by the strong play of Anderson County, the Trojans drove the ball downfield with every weapon of Girard getting critical gains ultimately setting up Girard in the red zone. Senior Wes Jahay tied the game back up on a 5-yard run down the right side with Davidson converting on the extra point, 14-14.

As the first half came to a close, the Bulldogs struck on the Trojans mistake of leaving an Anderson County receiver open downfield for a 40-yard touchdown pass. The Bulldogs at halftime led the Trojans 21-14.

Much like the touchdown to end the first half, the Bulldogs struck once again as the third quarter expired on a 73-yard passing touchdown putting Anderson County up 28-14 heading into the fourth.

Lallemand opened the fourth quarter running in a 3-yard touchdown as the Trojans trimmed score to 28-21. Anderson County’s defense would hold up the Trojans from making a comeback attempt as the Bulldogs went on to win 35-28 over the Trojans.

“There wasn’t a whole lot of possessions in the game, so we had to take advantage of each one,” said Head Coach Neal Philpot in an interview with Girard Sports Live. “We did some nice things offensively…our kids showed a lot of fight coming back in the fourth quarter, proud of them for that.”

Girard (2-3) stays on the road for their upcoming district matchup against undefeated Prairie View (5-0). The Buffaloes come into the matchup fresh off a 22-6 victory over Burlington.

“We can only control ourselves and what we do going forward,” said Philpot. “We have to watch film, learn from it, put it to bed and move forward.”