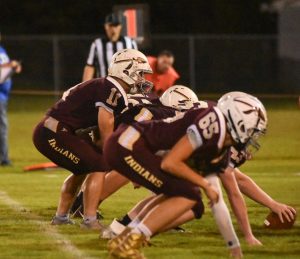 Senior Adam Albertini gets set to snap the ball in their conference matchup against the West Elk Patriots, Sept. 20, where the Indians won 52-6. -PC/ Sean Frye

Senior Katie Coomes took the honor of 2019 St. Paul Homecoming queen before to the game.

Senior Adam Albertini opened the game with a 24-yard touchdown. Senior Easton Dent ran in the two-point conversion at the Indians lead 8-0.

On the following Jets drive, St. Paul senior Chase Bradshaw recovered a fumble setting up the Indians in great field position. This then led to Albertini running in a 2-yard touchdown on a quarterback option as the Indians controlled the game with a 14-0 lead.

Not holding back yet, Albertini returned a punt from the Jets for a touchdown piling on the Indians lead, 20-0.

Scoring every time they possessed the ball, the Indians’ offensive attack became too much for Altoona-Midway as the mercy rule was implemented at halftime. St. Paul went on to win 76-14 over the Jets, as the Indians remain undefeated on the season at 5-0.

The Indians (5-0) travel to Marmaton Valley Oct. 11 for their upcoming conference matchup against the Wildcats (1-4).