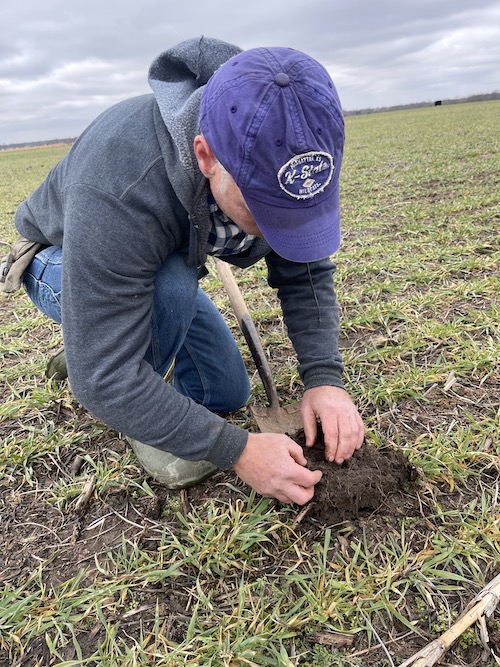 Jeff Murphy demonstrates the platy structure of the soil, a result of decades of heavy equipment running repetitively over the top of it. PC LESLIE MONTEE

Like many families across Crawford County, Jeff Murphy of Girard has farming roots tracing back to the 1800s. Growing up on the farm, he saw the way things were done, and he saw his family have success with conventional farming. As he transitioned into taking over the farm for his father Steve, Murphy found himself wanting to be more profitable, yet less invasive. With the cost of inputs on the rise, a way to reduce or eliminate those entirely would be ideal as well. What if there was a better way? As he poured over articles and information in search of a better way, he found a solution: regenerative agriculture.

Regenerative agriculture is a system of farming principles and practices that seeks to rehabilitate and enhance the entire ecosystem of the farm by placing a heavy premium on soil health, with attention also paid to water management, fertilizer use, and more. For Jeff, his overall interest is simple. “I want to restore the health of the soil, be a steward of the land and God’s creation.” But making these goals a reality, like most things that change, does not come easy. In 2021, Jeff experimented a little with the use of cover crops. He planted them on a small acreage of his soybeans and liked what he saw. So this year, he’s going all in. “Everything we farm will be this way. Corn, beans, and wheat. Lespedeza hay, and our cow/calf operation.” This will be the first year that Murphy Generations Farm will operate 100% no-till.

But how can a farm operate without tilling the soil? A very good question, and probably one of the more common ones. More importantly, why would anyone want to? According to Jeff, the answer to these and more, lies within the soil itself, just beneath our feet. As Jeff unearths the roots of his hairy vetch plants, the soil comes out in flat layers. “This platy structure of the soil is related to tillage and tillage equipment having passed over the ground for decades,” remarks Jeff. Platy structure means that the soil contains flat peds that lie horizontally and often overlap. This type of structure will impede the vertical movement of water and nutrients, leaving it to penetrate only the surface layer of the soil. “The negative of that is that it will damage mycorrhizal fungi, the fungi that feed plants roots their nutrients,” Jeff explains. The answer? Let the plants, microbes, and earthworms do the work aggregating the soil. Soils that are well aggregated exhibit greater soil health, ensure greater agronomic productivity, are less susceptible to soil erosion, and can play a role in carbon sequestration. Cover crops like cereal rye provide a carbon source naturally. Triticale, like in Jeff’s fields, has an extensive root system that encourages the capturing of nutrients and gives organic matter back to the soil as well as helping prevent erosion. Hairy vetch, a legume, also prevents erosion and provides nitrogen to the crops that are grown after it is terminated. Ideally, these crops will reduce the need for use of conventional fertilizers, which have skyrocketed in recent pricing.

Change does not come without challenge. Regenerative agriculture is a new idea in Crawford County and for Jeff, his main challenge has been learning. “It’s a new approach, a different way to farm. Learning about equipment and how it’s gonna perform, learning how to manage the cover crop.” According to the United States Department of Agriculture (USDA) website, the Crawford County average soybean yield was 32 bushel per acre in 2020. Jeff has a goal of growing 60 bushel per acre this season. While that sounds like an inconceivable goal at almost twice the county average, Murphy has no qualms about setting it that high. “I saw some good results with what I did last year. I made 50 bushel anyway. I see many farmers getting much better results than the county average with regenerative practices.” Cover crops are known to benefit soybeans because they help keep the ground shaded and cool. When plants get too hot, they don’t like to eat and go into defense mode, hindering the growth process and lowering their potential.

Many of the ideas used on Murphy Generations Farm come from the advice of other farmers. Jeff also did a lot of reading on the subject before diving in and recommends anyone who is considering making a change do the same and talk to other farmers with similar practices. At the Southeast Kansas Soil Health Conference in McCune held this past February, Jeff was asked to lead a panel focusing on local implementations of profitable soil health practices. While he was honored to do so, he still considers himself a newbie to the subject, learning and experimenting, and still getting started on his journey. But the conference was well-attended with over 50 people in attendance, some coming from other counties and even other states to learn and discuss. In Jeff’s opinion, practices like his will be more prevalent in the near future. “Once more people are more exposed and learn more about it, they’ll see there’s so many benefits with reducing input costs.” he explains. “I think a lot of environmental regulations will have an influence too.”

Towards the end of the growing season, Jeff hopes to be part of another soil health meeting. “Probably in August,” he says. “I hope to get out on land and dig soil pits and see what’s been happening down there.” He hopes to collaborate with K-State Research and Extension and Great Plains Regeneration for an insightful and educational presentation to be offered to the public.

With a solid farming background, and an Agricultural Engineering degree from Kansas State University, Jeff plans to continue building his knowledge and implementing new ways to restore his land. When harvest rolls around, Hometown Girard will provide an update on Murphy’s results. We are hopeful it will be a good one! 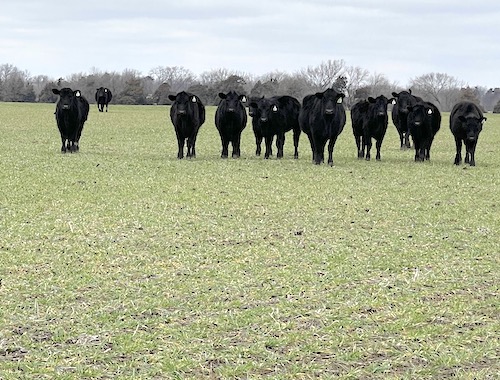 Cattle graze the cover crop field, proving that an acreage can be used for more purpose than just one. PC LESLIE MONTEE.