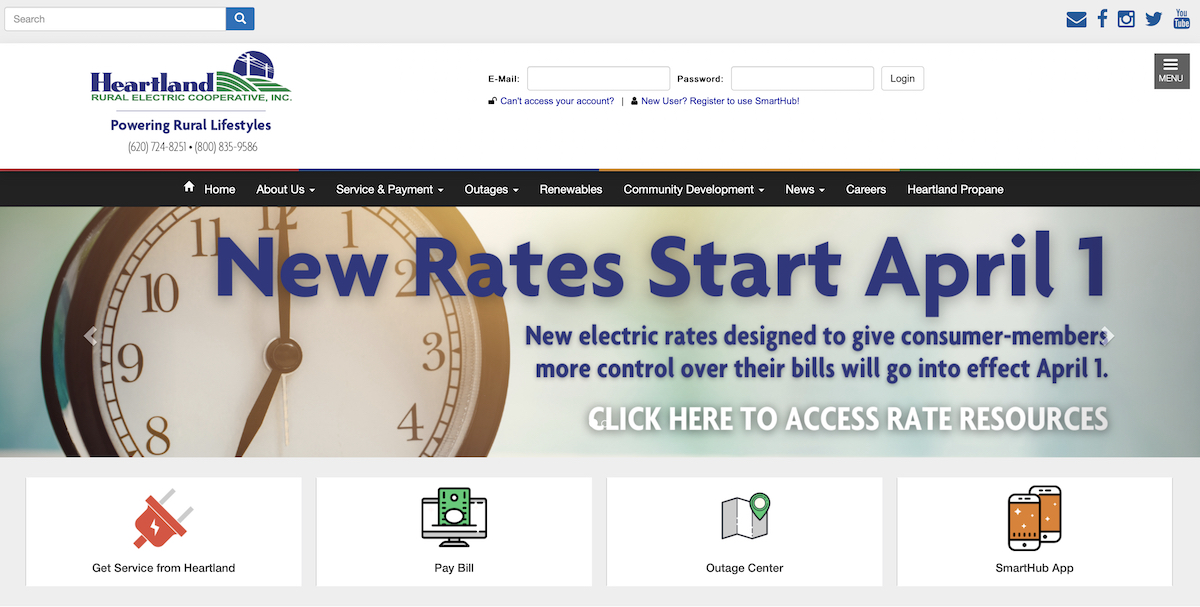 ▸▸ Everyone is always looking for ways to lower their expenditures and monthly bills. For the first time in 80 years, Heartland Rural Electric Cooperative is changing up the way they bill their customers in hopes that a new rate structure will help put more control over their monthly bill.

At an open meeting of the membership on January 28, the Heartland Board of Directors voted unanimously to adopt a new rate structure.

According to Heartland CEO Mark Scheibe, the existing rate structure is not set up to handle fluctuations. “There has been a lack of alignment between what Heartland gets charged and what they charge their customers.”

Heartland leadership hired Guernsey, an Oklahoma City-based consulting company, to conduct a cost of service study. The result of the study indicated that a rate increase of approximately 1.5% was necessary. Heartland’s rate increase will be 1.5%, and the new rate will go into effect April 1, 2022. In 2018, 2019, 2020, and 2021, the service availability charge rose by $2 per year, but with the new structure Heartland expects that the $1 raise this year will hold steady for the next few years.

Along with the new service availability charge, which will go from $38 to $39 each month, rates will also change in the way consumers are billed.

Under the new policy, each customer will be able to choose one of three options in the way they are billed. “We’re probably one of the first cooperatives in the state to offer multiple rate options on this scale.

It’s not easy for us to implement, but we feel like it’s the right thing to do,” stated Doug Graham, Communications Specialist for Heartland. A series of focus groups were held before finalizing the rates, and what Heartland found was that people like to have a choice. Some were happier with one option, while others were set on another, but the thing all customers had in common in the focus groups was that they liked the ability to choose for themselves.

For the Heartland members who are able to keep track of their electric usage during peak times in the summer, the Peak Savers rate will provide more control over their bills than ever before. This rate will be the default rate for new and existing Heartland consumer-members when the changes take effect.

The peak charge will only occur in June-September and will only be calculated on Heartland-declared peak days. The peak hour will only occur between 3:00-8:00 PM, but never on weekends or holidays.

Similar to the old Peak Savers program Heartland offered, customers will be notified of the peak alert 24 hours prior to a day that has a possibility of being the highest day of usage for the entire KEPCo grid.

Members can then choose to reduce their usage during the peak hours and save on their charges. Those on the Peak Savers plan will be able to benefit from a lower kWh charge for the entire year. Energy charges will be $0.101510/kWh during normal usage times and $2 per kW during the monthly peak hour.

Some Heartland members would rather know exactly how much their energy usage will cost them.

For those members, the Time of Use rate will be most beneficial and easily predictable. Charges will be based on monthly usage and energy will cost less off-peak but will be more expensive during the peak hours every day. Though the Peak Savers rate will be the default for all residential Heartland users, any who are interested in changing to the Time of Use rate may do so upon request if they are not on a prepaid account.

The third option is the Time of Use EV rate. This rate is exclusively only to those who own electric vehicles and provides them an even cheaper alternative time for electrical use: 12:00-4:00 AM at $0.040994 per kWh. Level two or three electric vehicle chargers must be installed at their service location to be eligible for this rate option.

For those who may be confused about which option is right for them, Heartland has that covered too. On their website is a handy tool: the rate calculator. This calculator allows a customer to enter their account number and the calculator will then show how much one would have paid in the past two years had they been on one of the new rate plans.

While most people show concerns that the peak usage hours are indeed their peak times of use, Scheibe says not to worry. He suggests simply shifting some of their usage to outside the window. For example, load the dishwasher when needed, but don’t run it until after 8:00 PM. Bump your thermostat a couple of degrees during the peak times. Countertop appliances such as air fryers and crockpots can use much less energy for cooking dinner than a traditional stove. In the warmer months, grilling out is a perfect alternative.

Additional resources and information about the new rate structure can be found on the Heartland website, and their employees stand by, ready to help answer any questions their loyal consumer-members may have to help make the smartest choice for their family. “This is a big change, but one that I truly believe is needed to ensure we’re ready for the future. Everyone here at Heartland is dedicated to doing what’s right for the membership as a whole, and that’s what’s driving this whole process,” concluded Graham.