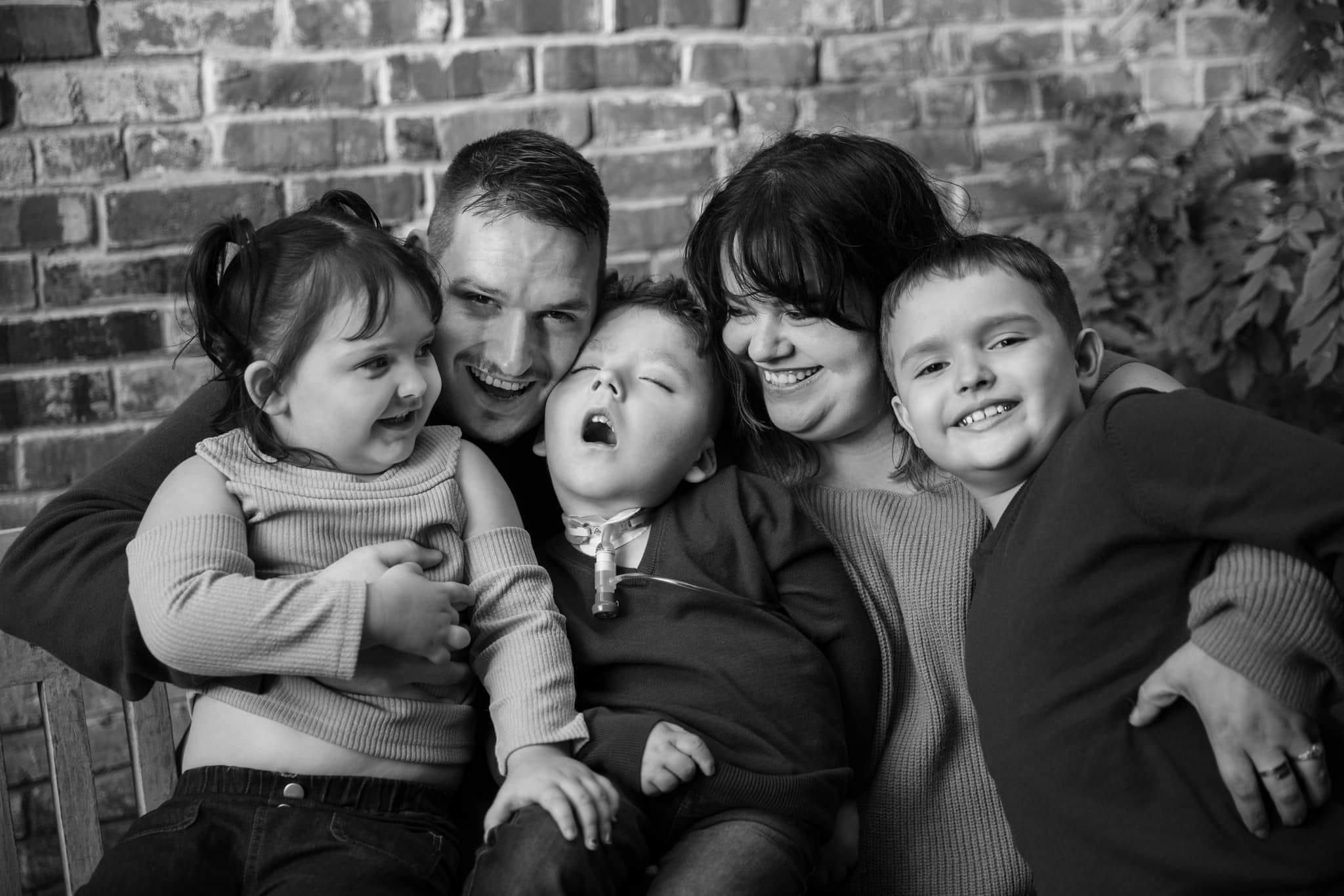 ▸▸ When you hear about five-year-old Griffin Albritton, he sounds like any other boy. He loves music, playing with his siblings Talon and Talia, being around other children, and being held by those who love him. But Griffin is not ordinary.

In fact, he is so extraordinary that in his years he has lived thus far, he has impacted the lives of everyone he encounters or who hears his story.

Griffin’s parents, Allen and Michelle Albritton, were elated to discover they were pregnant with another little boy just two years after the birth of their first son, Talon.

What started out as a smooth, joyful pregnancy, ended with confusion and dismay at his birth in the hospital.

When Griffin was born, he was described as coming out “limp” by his parents.

He was quickly whisked away by the concerned nurses and doctors for what was thought to be breathing difficulties. Over time, it was learned that Griffin had been born with two brain conditions: polymicrogyria and heterotopia. He also lives with Pierre Robin sequence, infantile spasms, and epilepsy.

When Michelle bluntly asked one of Griffin’s doctors what they needed to expect for length of life, they were told that children like Griffin do not make it to double digits of age.

While these diagnoses may seem like they would leave a family feeling hopeless, the Albrittons are the complete opposite. What could be a downhearted story filled with sadness is instead one of hope and love. Griffin is loved by everyone; so much so by his siblings, that they can often be found arguing over who loves Griffin more.

They know Griffin is their miracle. Living longer than any doctor thought he would, Griffin is strong. “He has the heart of a warrior,” Michelle describes. “When Griffin had heart surgery, it was very risky. He was supposed to be in the hospital for no less than a week, and we brought him home after four days. Griffin has always proved his doctors wrong and made them think outside the box.”

Griffin loves his life and is making the best of

his days with his family, teaching them things every day. His family believes that Griffin, like all of us, are born with a purpose.

And though it may seem like fulfilling a purpose in Griffin’s condition at such a young age is impossible, that’s simply not true.

“We truly believe Griffin’s purpose is to teach those he meets, that things aren’t what they seem…and no matter how much time we have, to not dwell on the time we won’t have, but to truly live in the days we do have,” says Michelle. Something we all could stand to learn.

New medical terminology, procedures, and things like performing CPR on a child with a tracheostomy are among some of the things Griffin’s family have learned in his life. But more importantly, they have learned how the small things in life can turn into the biggest blessings and that we must celebrate every one of them along the way. That’s exactly what the Albritton family has been doing lately.

“One of the best things Griffin has taught is the true meaning of unconditional love.” As parents, we probably cannot count how many times our children have told us “I love you.” But Michelle can. Griffin has told her once. Griffin is nonverbal, yet one day while cuddling on the couch, Michelle was showering Griffin with love telling him she loves him, and he repeated it back. Michelle gasped with disbelief and described this moment as her favorite memory of all time. “Griffin doesn’t talk, so I know that was a blessing from God.”

Over the years, goals for Griffin have changed. One goal was to have him off a ventilator, which he is now. They are still working on his head and body control. But recently, goals have changed yet again.

In late summer of 2021, the Albrittons were given the unfortunate projection that Griffin only had three to six months left on earth with them. Their goal now is to simply have one more day with him, to spend as much time as possible together as a family. It has been said that time is a gift that can never be bought, can never be given to us by anyone, and one we can never get back.

Though time is something Girardians cannot give to the Albrittons, they have supported them every step of the way to make sure the time they do have can be enjoyed.

Michelle works at the Eastside Café, a fact I am sure many of you already know. As she works, she has people come in regularly and ask how their family is doing, assuring them that their prayers are always with them. “My husband and I both grew up in foster care and I was adopted when I was 11.

So, we moved around a lot when we were younger and never really felt like we belonged to a community,” explains Michelle. “At the age of 37 and 33 we can finally say that Girard is our home, and our kids will grow up knowing that they are from an amazing town with people who really care about one another.”

People have shown up at their door with food, gifts, supplies, and everything in between. This past Christmas Eve, the Girard Police Department, Fire Department, Chamber of Commerce, and others from the city showed up with a full homemade Christmas dinner for the Albrittons.

“We get asked all the time why we moved from Florida to Girard,” says Michelle, “and I normally say because of my sisters. Looking back at everything we believe the Lord knew this was where we needed to be, not just because of my family, but He knew we would need a strong and loving community to help us with our journey with Griffin. Honestly, who has a whole town that shows support like ours does?”

Griffin’s story can also be followed on his Facebook page: The Adventures of Griffin.

For their strength, perseverance and hope in adversity, and the ability to bring out the best in our town, Hometown Girard is proud to salute Griffin and his family as Hometown Heroes.