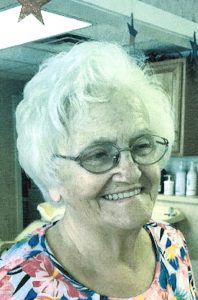 Lois was born June 14, 1935 in Barton County, Missouri, a daughter of George H. and Gertrude A. (Askins) Howard.

Funeral services will be at 10:30 a.m., Wednesday at the Smith-Carson-Wall Funeral Home of Girard, Kansas with Pastor Rick Prideaux officiating.  Burial will be in the Girard Cemetery.

In lieu of flowers, memorials are suggested to Harry Hynes Hospice or Angels Among Us and these may be left at the funeral home or mailed to the Smith-Carson-Wall Funeral home, 518 W St. John, box 258, Girard, 66743.