← AARON LEWIS TO PERFORM AT THE MEMORIAL AUDITORIUM FEBRUARY 29
Obituary: Lois A. Brown → 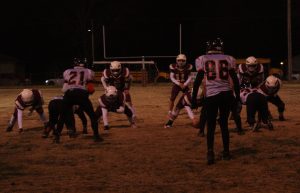 Senior Adam Albertini (#11) stands in the pocket before an offensive play by the Indians during their regional game against Waverly, Nov. 8, where the Indians prevailed 28-18.

A close contest throughout the first half, both teams battled it out in what would become a defensive battle. Penalties and turnovers haunted each side throughout including three fumbles from the Indians.

St. Paul trailed for the first time since their first game of the season midway through the second until senior Adam Albertini ran in a 32-yard touchdown to turn the tide and take a 16-12 lead at halftime.

Defense reigned supreme once again throughout the second half but the Indians were able to overcome the adversity. St. Paul outscored the Bulldogs 12-6 in the last half as the Indians went on to win 28-18, advancing to the 8-Man DII Sectional.

The Indians will play Friday, Nov. 15, where they host three-time defending state champion Hanover (9-1) who defeated their previous opponent Frankfort 38-32.