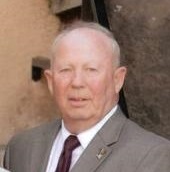 John served his country as a SSGT in the United States Air Force.  He served 13 months in the Republic of Viet Nam.

John was a life member of the Brown-Bishop Post No. 704, Veterans of Foreign Wars and a 50 year member of the George C. Brown Post No. 26, American Legion.  He held every officer position in the post and served 8 terms as Commander.

After his discharge, John attended Pittsburg State University and received his BS Degree in 1976.

John married Beverly Hartog Stolte on June 6, 1981 in the Trinity Lutheran Church in Girard.  She survives of the home.

John enjoyed his family, fishing with his grandchildren and attending their sporting events, American Legion youth projects, and dancing and day trips with Beverly.

John was preceded in death by his parents and a niece, Stephanie Ashbacker Wilson.

Funeral services will be at 10:30 a.m., Thursday at the Trinity Lutheran Church in Girard with Pastor Mark Wenzelburger officiating.  Burial will be in the Girard Cemetery with Military Honors conducted by the Brown-Bishop Post No. 704, Veterans of Foreign Wars and the George C. Brown Post No. 26, American Legion.

The family will receive friends from 9:30 a.m., Thursday until service time at the church.  Friends may call after 2:00 p.m.,  at the Smith-Carson-Wall Funeral Home in Girard.