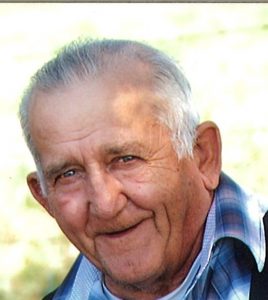 Frank served in the US Army Reserve as a Private First Class from 1963 until 1969. He was stationed at Ft. Leonardwood in Missouri and Ft. Carson in Colorado.

On April 24, 1965, Frank and Sandra Sue Neil were united in marriage at St. Aloysius Catholic Church at Greenbush.  She survives of the home.

Frank worked at Ft. Scott Livestock Market, the Parsons Livestock Auction, and in construction.  He was the founder of RFD Fence Company and he farmed and raised livestock with his family.

He enjoyed playing cards, especially Pitch, and in his later years, he could often be found driving around and overseeing the farm operations.

He was a member of St. Francis Catholic Church in St. Paul and the George L. Hendricks Post No. 102, American Legion of Erie.

Frank was preceded in death by his parents.

Mass of Christian Burial will be at 10 a.m., Friday at St. Francis Catholic Church in St. Paul with Fr. Sam Pinkerton as celebrant.  Burial will be in the Girard Cemetery with Military Honors by the George L. Hendricks Post No 102, American Legion of Erie.

The Rosary will be at 7 p.m., Thursday at St. Francis Catholic Church followed by visitation.

Friends may call at the Smith-Carson-Wall Funeral Home in Girard from 10 a.m. until 4 p.m., Thursday and after 5 p.m. at St. Francis Catholic Church.