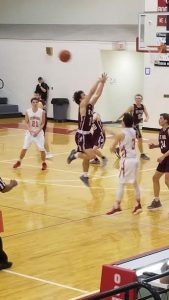 Junior Adam Albertini goes up for a loose ball in their matchup against the Oswego Indians where they went on to win 63-43. -PC: Gina Albertini

St. Paul was back in action Thursday, Feb. 14 in a rescheduled non-conference matchup against the West Elk Patriots. The original date for the contest, Jan. 22, was postponed due to inclement weather.

In the Lady Indians previous game, Feb. 12, they were able to narrowly escape the Oswego Indians 39-32 continuing their undefeated league streak. Thursday evening, St. Paul (12-4, 8-0) squared off against a very talented West Elk (14-2, 7-0) who has shared a similar story this season.

It was a low-scoring affair throughout as baskets came at a premium for both teams.

Junior Katie Coomes provided much-needed baskets in the first half scoring four of the Lady Indians’ eleven points. In a defensive stalemate, the Indians and Patriots were tied at halftime, 11-11.

St. Paul looked to the free throw line in the second half as that was where a majority of their points would come from. Both teams ground it out until the last minute but the Lady Indians (13-4, 8-0) ended up prevailing 28-26 over West Elk (14-3, 7-0) off-key free throws from St. Paul’s class of juniors.

Coomes led the Lady Indians in scoring on the night with 9 points total. Junior Emily Hutcherson made key efforts as well finishing with 8 points, 6 of those coming in the fourth quarter alone.

Much like their previous game, the Indians were able to get hot in the first half off terrific shooting from their wings. Junior Adam Albertini provided a major spark to the offense as he broke double-digits in the first half with 12 points total.

West Elk would not shy away just yet as their offense matched the Indians efforts with the score 25-23 at halftime.

St. Paul continued to pour it on offensively as the Patriots defense could hardly contain the Indian’s Albertini and Haney.

West Elk made a strong effort to get back into the game, but the Indians would open the contest to almost double-digits as they went on to win 56-47 over the Patriots.

Albertini had a career night for the Indians finishing his dominating performance with 26 points total. Senior Kenny Haney made a key contribution as well ending the night with 10 points.

The Indians are set to play tonight (weather permitting), Jan. 15, against the Yates Center Wildcats in a highly-anticipated conference matchup.