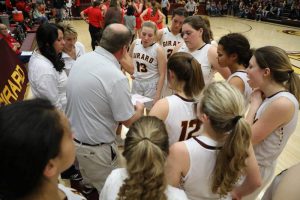 Coach Herlocker gathers his team during a timeout of their game against the Baxter Springs Lions where the Lady Trojans would fall 35-33. -PC: Ron Gates

Baxter quickly jumped to a 5-0 lead to start the game, but Girard was able to get themselves within reach off their aggressive inside attack. The Trojans would take the lead for the first time early in the second quarter, but Baxter did not back down as neither team was willing to let the gap grow.

With some miscued turnovers late in the second quarter, Baxter would take advantage of the Lady Trojans mistakes grabbing a 20-15 lead at halftime.

Size, as well as the inside attack of the Lions, played a major factor in Baxter. Maintaining their lead, the Lady Trojans had no answer for the sheer all-around size of Baxter’s team. A clutch three-point buzzer from senior Drake Worrell would cut Baxter’s lead to within two heading into the fourth as it was a back and forth contest.

With 2:20 left in the game, Baxter managed a 5-point lead. The Lady Trojans weren’t ready to back down yet as key transition baskets and steals from seniors Flaharty and Smith would cut the lead to one with 48 seconds remaining. Girard was then forced to foul Baxter as the Lions would make one of two with 18 seconds remaining. The Lady Trojans missed the tying basket as they fell 35-33 to the Lions.

“We made too many mistakes in the first half, we fouled too much in the second half. That set us up a little bit behind the 8-ball,” said Coach Brad Herlocker. “I thought the girls played their hearts out…I’m proud of my girls and I wouldn’t trade them for anything.”

Senior Kalyn Flaharty lead Girard in scoring with 10 points on the night in this low-scoring affair.

The Lady Trojans will face the Riverton Rams (0-20) in the first round of the Class 3A Regional Feb. 25, at 6 where they will play in Girard.