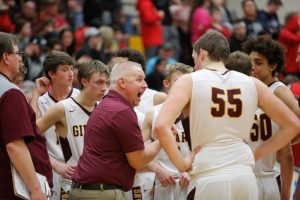 Coach Rod Wescott gets his gameplan set during a crucial timeout late in their game against Baxter where Girard would win 68-63 in OT. -PC: Ron Gates

Suffering a tough 35-34 loss in their last game against the Colgan Panthers, the Trojans looked to bounce back Thursday, Feb. 21 against the Baxter Springs Lions. Thursday’s game had major implications as the winner of the matchup went home with the CNC title.

Two teams with identical records (15-3, 9-2) you could cut the tension in Ted R. Taylor Gymnasium with a knife.

As expected, both teams exchanged baskets throughout the first half as neither team was willing to let up. Senior Evan Troike would get into early foul trouble as he would sit out much of the first quarter.

After a quiet first quarter, senior Caleb Muia got going getting his looks inside that are nearly automatic. Momentum started to swing the Trojans way with Girard’s seniors sinking key baskets to give them a small advantage. But Baxter found their way back into the game as neither team was able to get a clear advantage.

Baxter’s Trey White, one of the top players in the state, began to heat up from behind as Girard struggled to his performance down. Luckily, White would have to sit out much of the third and a small portion of the fourth. Girard took advantage of his absence getting the game back to within one after being down as much as five.

Back and forth the teams went in the fourth quarter as it looked to come down to whoever had the last possession. With one-minute left, Baxter would tie up the game. Girard held onto the ball for the majority of the final minute but Collins missed his game-winning three as the game went to overtime tied at 55.

In OT, Girard jumped out to an early four-point lead off transition baskets from seniors Doherty and Muia. Baxter stayed within two to three points throughout overtime as they were able to get fouled and sink their free throws. With 30 seconds remaining, Baxter made a layup cutting the lead to two points. Forced to foul, the Lions would send Collins to the line where he made both giving Girard a 66-62 lead with 19 seconds remaining.

Baxter was then fouled once again making one of their two free throws bringing the score to 66-63 with minimal time remaining. Collins would make one of his two free throws which ultimately sealed the game for the Trojans as they went on to win 68-63. With the win, the Trojans (16-3, 10-2)are the 2018-19 CNC Boys Champions.

Three players finished in double digits for the Trojans Thursday night; Muia (28), Worrell (13), and Collins (11). Seniors Troike and Doherty made a significant impact as well finishing with 8 points each for Girard.

Following the victory, the Trojans are set to face the Riverton Rams (9-11) in the first round of the Class 3A Regionals Feb. 25 following the girls’ game in Girard.