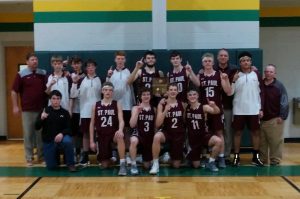 After two semifinal victories, the St. Paul Indians found themselves competing for the chance at a sub-state berth. Saturday, Feb. 23, the Indians put their season on the line in two win or go home matchups.

Both teams would exchange baskets throughout the first half but neither team was able to pull away just yet. Much like their prior game, freshman Emerald Struthers provided a heavy load of scoring the first half scoring 7 points for the Lady Indians.

The aggressive, ball-hawking defense of the Lady Indians provided a major spark in the third quarter as they would hold Sedan to just 5 points. From there, St. Paul’s lead would grow to become too much for a Devils’ comeback as the Lady Indians went on to win 40-31.

Junior Emily Hutcherson finished first in scoring for St. Paul Saturday night with 10 points for the Lady Indians. Junior Katie Coomes just missed finishing in double-digits as she ended her night with 9 points.

The first half was an absolute battle as both teams exchanged baskets throughout with neither team backing down. Junior Kaleb Lemmons provided needed offense for the Indians scoring 7 of their 18 first-half points.

At halftime, the Indians trailed the Spartans 19-18.

With several lead changes throughout the second half, the game looked to come down to whoever had final possession. The Indians were able to outscore the Spartans 13-9 in the third quarter, giving them a small advantage heading into the final minutes.

Cedar Vale/Dexter made strong efforts to get back into the game, but the Indians were able to hold off the Spartans 39-36 off clutch free throws.

Seeding for the 1A sub-states is to be completed and released on Sunday, Feb. 24.