St. Paul gutted out a 48-44 victory over Waverly Friday night, in a game that saw 32 minutes of physical and intense play. 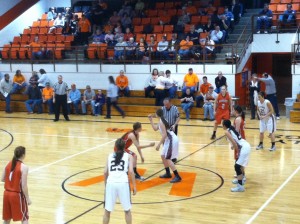 The Lady Indians advanced to the Sub-State finals with last nights victory over Waverly.

The first quarter was full of back-and-forth buckets, including six lead changes between the teams.  After  Ashton Wood collected an offensive rebound and put it back up to give St. Paul a 9-8 lead, Keyahnah Burk hit two free throws and a three-pointer to extend the lead to 14-8.  Waverly would bring the game within three points by the end of the first.

Burk hit a layup at the start of the fourth to bring St. Paul within one point, and she was fouled on another made layup minutes later, and after sinking the free throw, brought the Lady Indians within one once again.  With 4:10 left in the game, Camri Burke stepped to the line and gave St. Paul the lead after hitting both free throws, and they would not trail again.  St. Paul would take a 48-40 lead with 26 seconds remaining, but a layup and shot at the buzzer brought Waverly within four points to end the game.  Keyahnah Burk came up clutch for the Lady Indians in the fourth, scoring 10 of her game-high 19 points in the quarter, while Albertini and Burke scored three apiece to seal it.

For St. Paul, it was a gritty and hard-fought performance, and a great win playing on Waverly’s home court.  The Lady Indians, ranked 8th in state, will take on the fourth-ranked Marais des Cygnes Valley for the Sub-State championship tonight at 6:00 p.m. in Waverly.