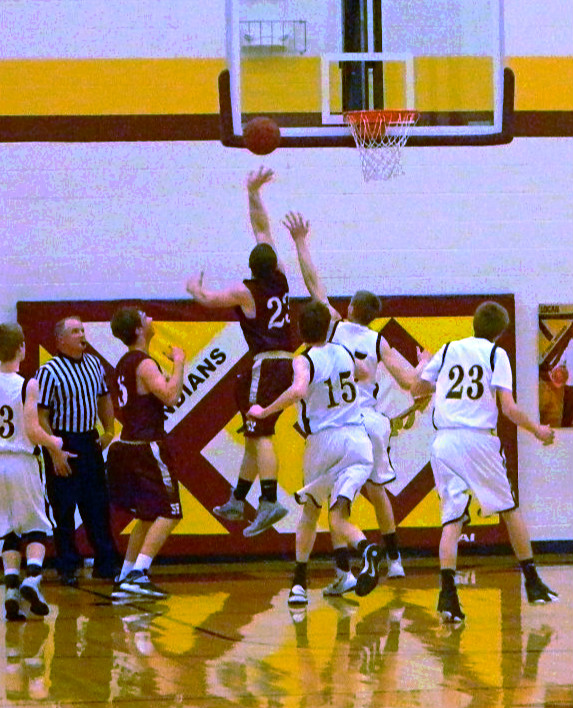 After a crazy run to the sub-state finals, the St. Paul’s Indians season came to an end Saturday night with a loss to Cedar Vale-Dexter. The boys had been drained physically and emotionally after a battle with rival Chetopa just 24 hours before this game’s tipoff. That may have had an impact, but you are playing for a chance to go to state, so that is a shot of adrenaline in and of its’ own.

Each team remained scoreless for several minutes into the game, and after one quarter of play it was tied at 5-5. The Indians committed some costly turnovers in the second quarter, and while they would hang close to the Spartans, self inflicting wounds would keep them from the lead. At halftime, Cedar Vale-Dexter held a 21-18 advantage.

Noah Winter scored five points in the third quarter to try and keep St. Paul alive. Patrick O’Brien, who got into foul trouble early on added four. The Spartan lead had grown to six points by the end of the third.

The Indian’s youth showed in the fourth quarter, as they made costly mistakes just as it seemed they were within striking distance. Cedar Vale-Dexter would take advantage, running away with a 49-34 victory over the Indians and propelling the Spartans into the state tournament.

Their season is over, and the Indians went just 5-17 on the season. Usually that wouldn’t be much to get excited about, but I think this team will be much improved in the next few years. The experience of making it to the sub-state championship game as mostly freshmen and sophomores will only make them stronger and bigger things will be ahead for this squad.

Winter led the Indians with eight points in the loss, while O’Brian scored seven points. Senior Preston Jacquinot finished his career as an Indian with 6.