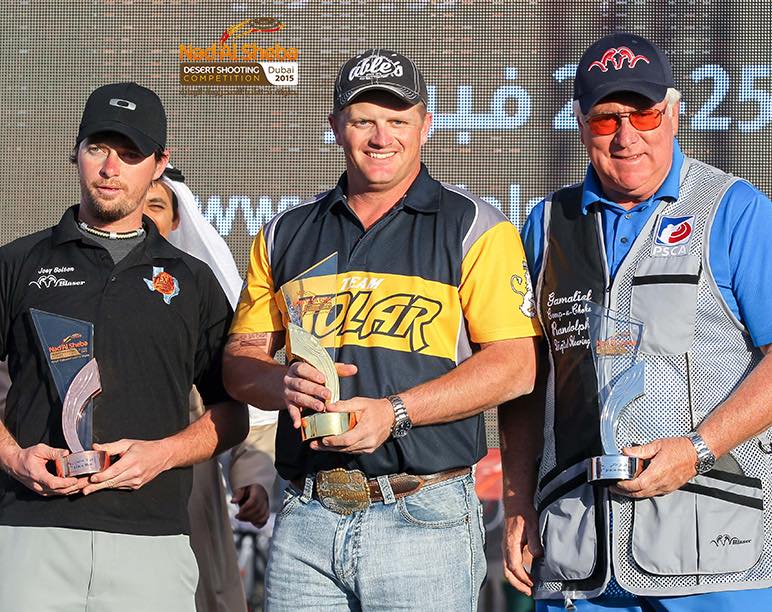 Walnut native Derrick Mein emerged victorious in the Nad Al Sheba Desert Shooting Competition Saturday, Feb. 28, in Dubai.
Mein outshot his competition in the Men’s Division by eight targets to clench the number one spot. In total, 954 shooters from 48 countries competed in the championship.

His wife Diana also shot at the competition, placing 31st.
Mein began his shooting career early, joining his father Rick in a small sporting clays league at a local club at the age of eight. With his dad’s help, he began to hone his competitive shooting skills and by the time he enrolled in Girard High School in 2000, Mein had already been named the Kansas State Sub-Junior Champion three consecutive times, listed on NSCA All-State Sub-Junior team twice and become the National Sporting Clays Sub-Junior Champion.
“You never know what might happen when you start out on something like that,” Derrick’s father Rick Mein said. “But he started out well and just got better as time went on.”
He didn’t stop there, however, and continued compiling shooting wins throughout his high school career while also competing in baseball, basketball and cross-country.
By the time he graduated from GHS in 2004, Mein had been named to the NSCA Junior All-American 3rd Team twice and become the NSCA National Championship 5-Stand Junior Champion, among other honors.
Following his graduation, he attended Lindenwood University in Saint Charles, Mo. on a dual scholarship for the college’s baseball and shotgun teams. After two years at Lindenwood, Mein transferred to Kansas State University where his shooting success continued with a first-place finish at the ACUI Collegiate Clay Target Championship his senior year.
Upon receiving his B.S. in Animal Science & Industry in 2008, he moved to central Ohio to design and manage the Cardinal Shooting Center’s Sporting Clays facility. Naturally, he continued his shooting success while working there, racking up a string of regional and national championship appearances and victories.
To achieve the level of success he has, Mein says his shooting technique is simple:
“Anything I need to do to break the target.”
While not able to watch their son compete, Mein’s parents said they kept up-to-date on his placing via texting and the Internet. Before the competition had even begun, they expected him to do well.
“We knew he had a good chance to place going in, but there were a lot of great shooters there, including the 2-time world champion. We’re certainly proud and we’re glad he was able to go in and get it done at the end.”

More to come including a full interview with Derrick in the next edition of Hometown Girard.