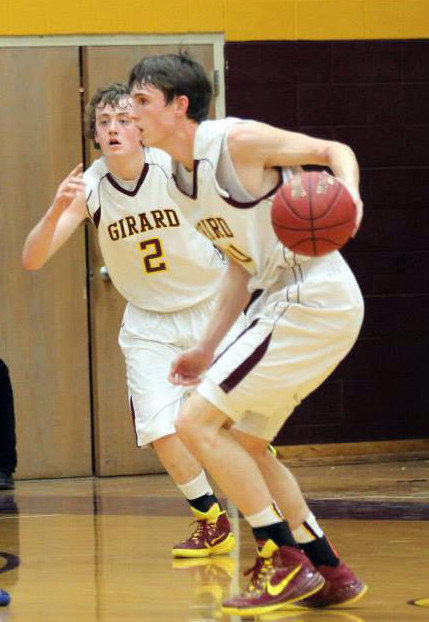 Drew Davied (R) and Laike Damman (L) led Girard with 20 points apiece in their sub-state blowout win over Iola on Thursday night. Girard will play for the Sub-State Championship on Saturday night at 7:30pm. PHOTOS ARE FROM A PREVIOUS GAME: BY JOYCE KOVACIC

The Trojans began their season against the Mustangs, a game that ended in a 60-44 Trojan victory. If you are comparing scores, it appears Girard’s defense is clicking at the right time, as they held Iola to just 24 points in a 41-point victory.

The Drew Davied and Laike Damman duo got the Trojans rolling in the first; Davied scored nine points, and Damman added six from a pair of trifectas. After one, Girard held a 19-10 lead.

Damman hit two more treys in the second and picked up a two-point basket, while Davied added seven in the quarter. At halftime, Davied had scored as many points as the entire Mustang team with 16. The Trojans led 41-16 heading into the break.

With a 55-23 advantage heading into the fourth, Girard scored 10 in the final quarter while holding Iola to just one point. Damman and Davied led the way with 20 points apiece, and Kross Hamblin scored eight for the Trojans.

With the 65-24 win, the Trojans advance to the sub-state finals for the second straight year. Girard will meet up with Prairie View at 7:30 Saturday night with a chance at making back-to-back state tournament appearances.