The Trojans captains (L-R); junior Caden Lallemand, senior Wes Jahay, senior Durbie McReynolds and junior Mason Huebner stand at midfield for a coin toss in the Trojans matchup Oct. 31 against the Raiders as the Trojans were defeated 34-0.

The Raiders opened the game driving down the field credited to their powerful option attack. Following a counter-option that put the Raiders in the red zone, Frontenac struck first in on a 19-yard quarterback keep. Nailing the field goal, the Raiders led 7-0 early on.

Girard’s offense couldn’t get anything going to begin the game struggling to find an answer against a Raider team that held the Columbus Titans to 24 total yards in the previous week.

Frontenac then scored once again on a 2-yard throw to the corner of the end zone following a high snap on a punt from the Trojans.

From there on, the Raiders continued to pile on the points while shutting out the Trojans as Frontenac went on to win 34-0 putting an end to the Trojans season.

“I thought we got better each week, extremely proud of our kids and I thought we played a lot of young guys throughout the course of the year and we got better and better so it’s a bright future there,” said Head Coach Neal Philpot. “We’re going to miss the four seniors graduating. Hats off to them because they showed some great leadership of getting in and going with some new stuff.”

“Their practice, work ethic in the weight room and the practice field, wasn’t always fun but it was commendable. They showed they weren’t always the most vocal guys but their work ethic was very high and very respected,” added Philpot. “They’re a big part of the program, there’s not many of them, but they’ve done a lot for us.”

Despite the loss, the Trojans finished the season at 4-5 overall going 1-2 in league play and 3-2 in district play.

Following an undefeated 8-0 finish to the regular season, the St. Paul Indians looked to carry their momentum into the first round of the 8-Man DII playoffs. Thursday, Oct. 31, the Indians stayed home as the team faced the Hartford Jaguars who came into the game 3-5.

Much like the majority of the Indians regular-season matchups, St. Paul dominated from the beginning whistle with their defensive backs becoming a key factor. The defense was all over the field Thursday night coming up with four interceptions returned for a touchdown. Hartford’s offense never had the chance to put the ball into Indian territory as the St. Paul defense held the Jaguars to under 60 yards of total offense.

Shutting out Hartford offensively, the game was called at halftime with the Indians prevailing 64-0.

Last week against Southern Coffey County, senior quarterback/running back Adam Albertini suffered a bruised knee. In the matchup against the Jaguars, Albertini showed no signs of injury as the senior rushed four times for 115 yards and two touchdowns. Albertini also provided a punt return and a pick-six.

Senior running back Easton Dent has become the workhorse offensively for St. Paul as of late. Dent finished the game with six carries for 67 yards and three touchdowns.

Following the victory, the undefeated Indians stay home for 8-Man DII Regionals, Nov. 8, against Waverly (6-3) who defeated Moran-Marmaton Valley (2-7) in the first round, 62-14.

-Lancers set to play Friday, Nov. 8, in a matchup against undefeated Humboldt (9-0) who previously defeated Southeast this season 50-18. 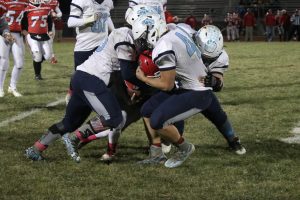