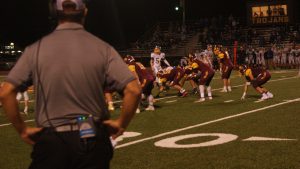 Coach Neal Philpot stands alongside the sideline as he watches his offense in their matchup Oct. 18 against the Iola Mustangs where the Trojans won 14-12.

Battle of the Trojans

Coming off 14-12 narrow victory over Iola, Oct. 18, the Girard Trojans traveled to Osawatomie Friday night in a ‘battle of the Trojans.’ Needing a victory, the Trojans put their season on the line in their final game of the regular season.

For the second half, the Trojans put together arguably one of their best halves offensively scoring three times in the third quarter and twice in the fourth. With the offensive explosion, Girard went on to claim a 56-22 victory over Osawatomie.

McReynolds had a career night for Girard rushing for nearly 170 yards providing a needed spark heading into the postseason.

Unofficial TBA, but the Trojans (4-4) are expected to travel to Columbus Nov. 1 where they will play the Titans (7-1) who coming off a 23-0 loss to the Frontenac Raiders.

In the Indians’ previous matchup, Oct. 18, they were able to easily handle Chetopa 71-0 after the game was called early in the second quarter. Following the victory, the Indians traveled to Le Roy, Oct. 25, in a matchup against the Southern Coffey County Titans.

Nevertheless, senior running back Easton Dent and sophomore backup quarterback Landon Beachner filled the role of helping the Indians prevail 64-14 over the Titans.

With the victory, the Indians remain perfect for the regular season at 8-0 marking the first undefeated finish for coach Keith Wiatrak. They begin the first round of the playoffs as the #1 seed, Oct. 31 in a home matchup against either Waverly or Hartford.