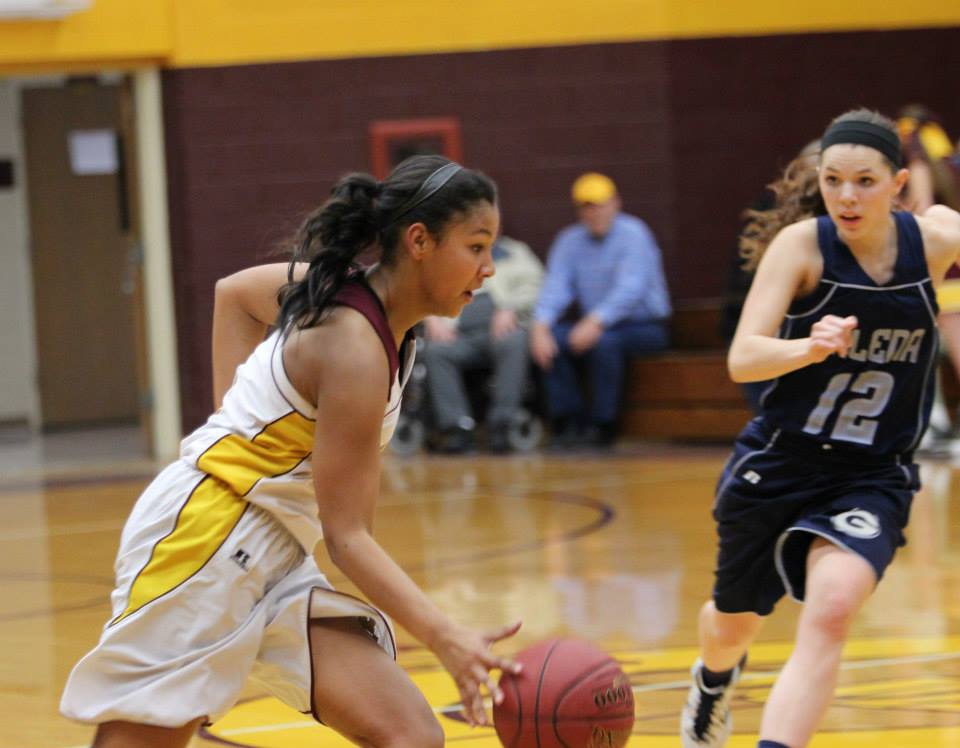 Olivia Hanson drives to the basket in the Lady Trojans dominant win over Galena Friday night. Hanson had 10 points on the night. PHOTO BY JOYCE KOVACIC 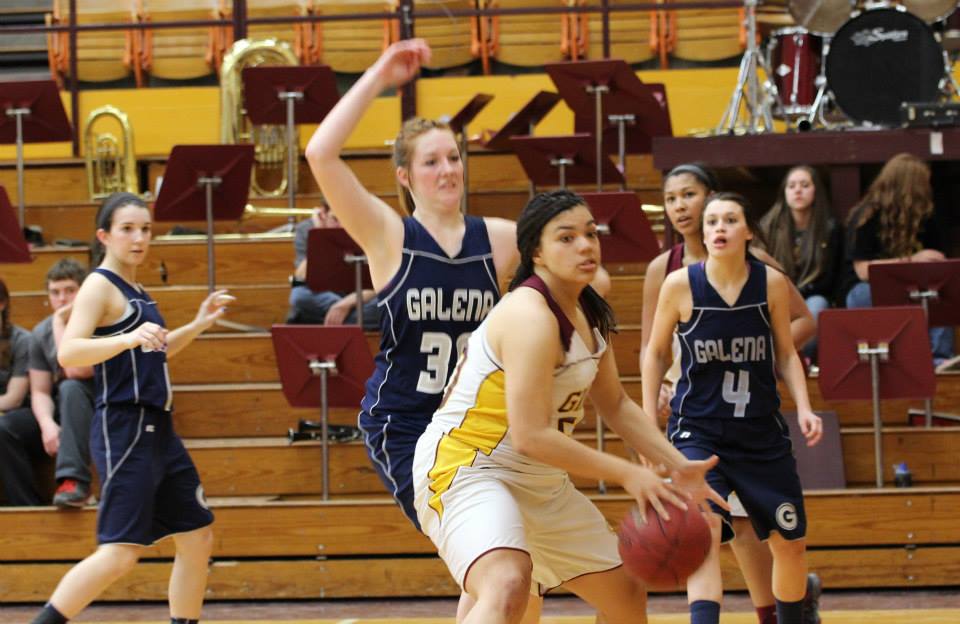 Morgan Herlocker added 6 points to the Lady Trojans victory on Friday. Girard will travel to Colgan on Tuesday to play the Panthers. PHOTO BY JOYCE KOVACIC

Galena visited Girard last night for league games, and the Trojans would come away with two victories. While the girls built a lead early on and ran away with it, the boys let the Bulldogs back in it before shutting the door.

The Lady Trojans were doing all they could in the first quarter to keep up with Galena, and the teams were trading baskets back and forth. At this point, the game looked like it would be close throughout and could go down to the wire. With just over one minute to go in the first, a Megan Gray triple hit the bottom of the net to break an 11-11 tie, the Lady Trojans would not give up their lead the rest of the night. After holding a 16-11 lead after one, Girard would see seven different players etched into the scorebook in the second quarter to total 19 points, and their lead was stretched to 35-17 at halftime.

Galena came out in the third and scored two points right off the bat, but those would be the last two they would receive that quarter. Girard’s defense went airtight the second half, allowing just two points in the third and three in the fourth. With a thirty-point lead in the fourth quarter, a running clock was initiated and the Lady Trojans cruised to a 53-22 win. “Our kids worked the defensive game plan to perfection.” said Coach Herlocker following the win. Part of that game plan was shutting down Abby Shelton, a returning CNC first-team selection from last year. Shelton was held scoreless in the game. “We’ve played a really tough schedule and our improvement is really starting to show,” said Herlocker.

Calea Augustin led Girard with 11 points. Olivia Hanson added 10, and Ashley Ray scored eight. With the win, the Lady Trojans improved to 10-7 on the season and 3-1 in league play. 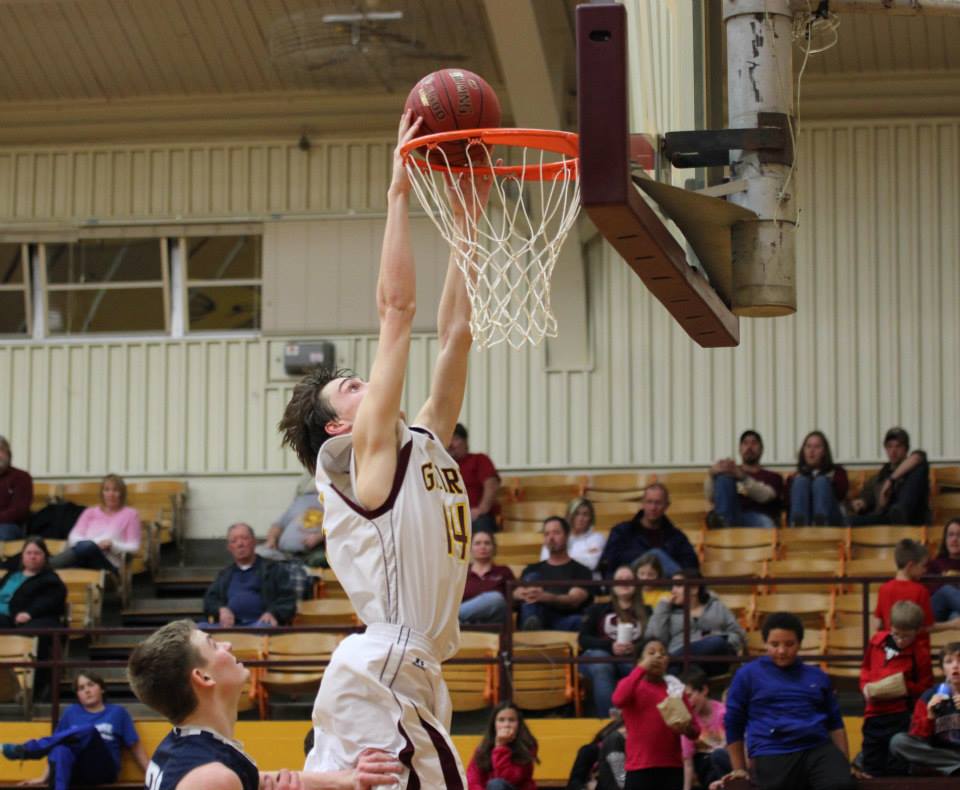 Drew Davied dunks one home, ending a Girard Trojan scoring drought on Friday and helping the Trojans to a victory over Galena. Davied & Tyler Green (below) led the Trojans with 13 apiece. PHOTO BY JOYCE KOVACIC 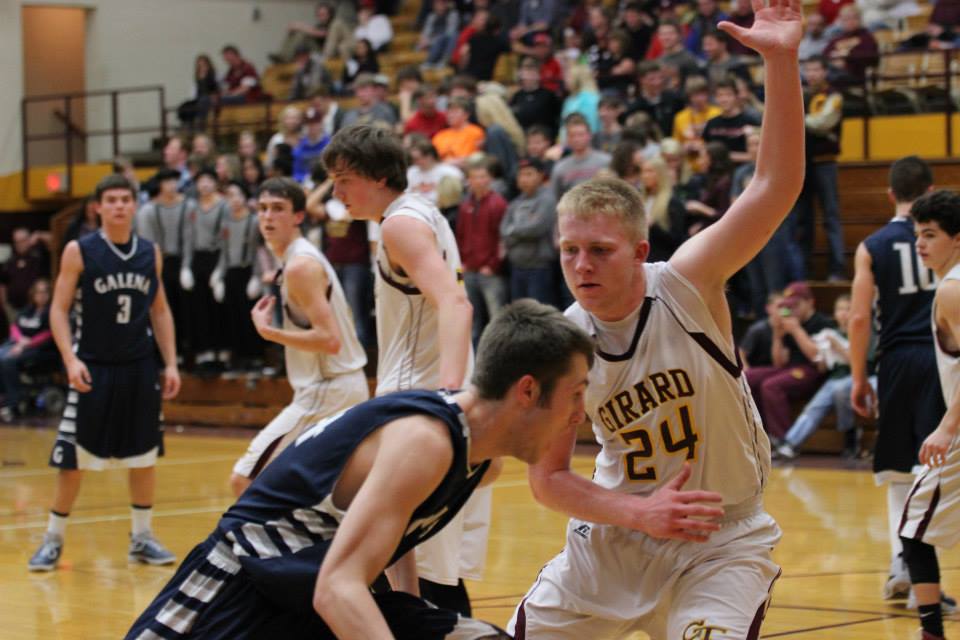 Tyler Green stops a Galena player from scoring in Girard’s win Friday night. Green led the Trojans along with Drew Davied (above) with 13 points. Up next for Girard, the Colgan Panthers on Tuesday. PHOTO BY JOYCE KOVACIC

Trojans survive late Bulldog rally
On the boys side, through three quarters the Girard Trojans had built up a huge lead over Galena, only to see it start to crumble in the fourth quarter. But, the resilient Trojans held on to take the win. Tyler Green started the game with six straight points, giving Girard an early advantage. The Trojans soon led 9-3 in the first, and the Bulldogs quickly got out of their man-to-man defense and switched to zone. Girard struggled to figure out the zone, but Eric Wilson beat it for a trey to give a 12-7 lead to the Trojans that they would take into the second quarter. Wilson’s three ball was the beginning of a period where 12 of 16 points were scored from behind the arc for the Trojans; the other four points were scored at the free-throw line.

Drew Davied, Junior Lindbloom, and Laike Damman each hit a trifecta for Girard in the second, helping to take a 31-17 lead into the break. In the third quarter, the Bulldogs seemed to fall apart, and Girard was taking advantage of easy looks at the rim. With their second consecutive 19-point quarter, Girard was taking a comfortable 50-29 lead into the fourth. Maybe too comfortable.

Damman started off the fourth with a long three-point bucket to give Girard a 24-point lead. Then the Bulldogs started chipping away. With 4:35 left to play, Coach Wescott called a timeout. Girard’s 24-point lead was now only 13. 36 seconds later, Wescott called another timeout after Galena scored four more unanswered points. A 15-0 Bulldog run had cut the Trojans’ lead to nine points midway through the fourth. After the timeout, Davied ended the scoreless streak when he drove the baseline for a two-handed dunk. Soon Galena was forced to put Girard on the free-throw line for a chance to stay alive, but the Trojans sunk their free throws and the lead didn’t fall below nine points until a meaningless trey from Galena found the bottom of the net with just seconds remaining.

Girard held on for a 65-57 win. Davied and Green each scored 13 apiece for Girard, and Damman added 11. With the win, the Trojans are now 15-2 on the year and undefeated in league play.

The Girard teams will travel to Colgan on Tuesday before hosting Riverton next Friday.