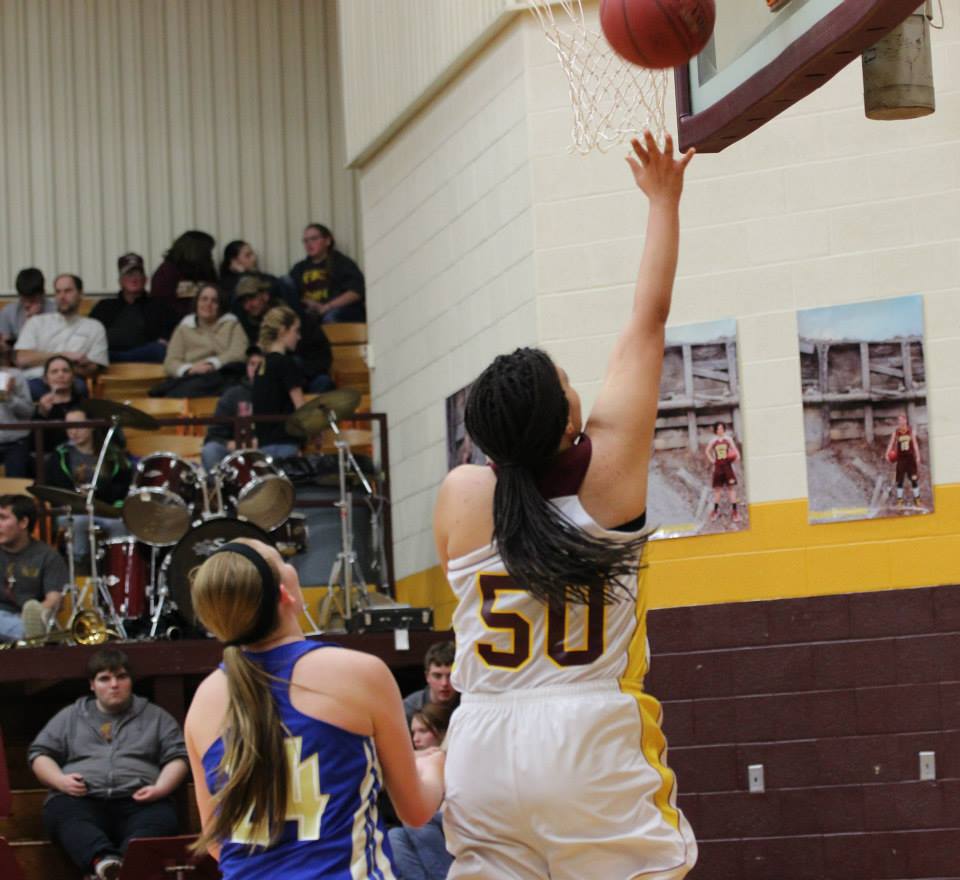 Senior night was good for #50 Morgan Herlocker, who led the Lady Trojans with 16 points in their route over Riverton. PHOTO BY JOYCE KOVACIC 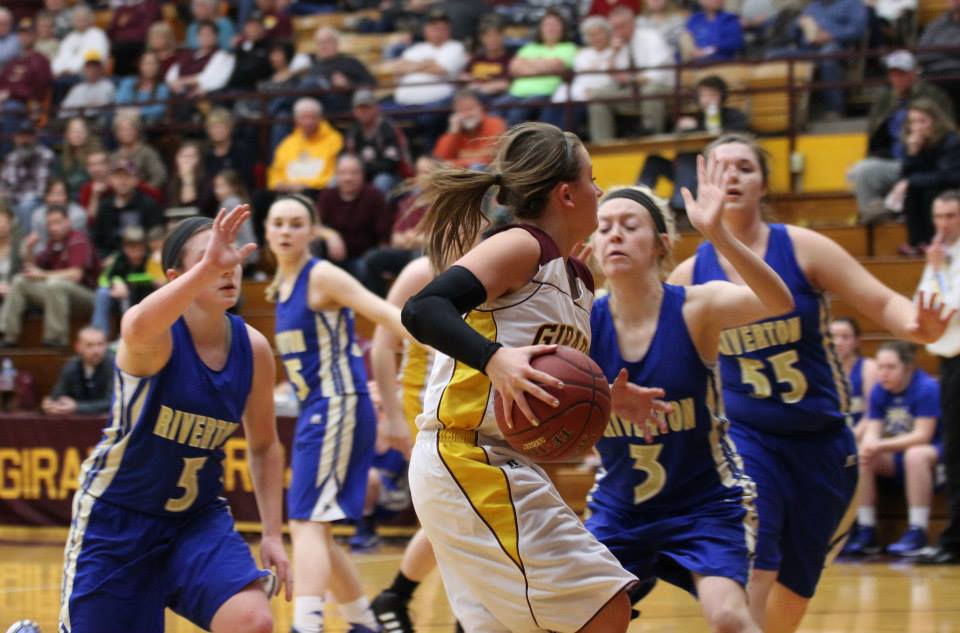 Jacey Murphy drives to the basket in the Lady Trojans win over Riverton Friday night. Murphy had 14 points in the game. PHOTO BY JOYCE KOVACIC

Friday night marked the last night of the season for Girard to play on their home court, and neither varsity teams disappointed. They hosted Riverton, who brought with them a struggling girls team and a very athletic boys team. The first game of the night was a blowout in favor of the Lady Trojans. Calea Augustin hit the first four points of the game, spurring Girard on a 14-0 run out of the gates. The Lady Rams would score their first point of the game by way of a free throw with 4:00 to go in the first quarter. Two more free throws made it a 14-3 game, but then the Lady Trojans went on a 10-0 run. At the end of one, Girard held a 24-5 lead. Jacey Murphy led the Lady Trojans with 10 points in the first. Ashley Ray’s eighth and ninth point of the second quarter alone gave Girard a 30-point lead, their largest of the first half.

Although the Lady Rams had their best scoring quarter of the night in the second with 12 points, Girard was still able to take a 44-17 lead into the locker room at halftime. Ray led all scorers in the first half with 11 points. The third quarter was the closest of all between the teams, as Girard scored 12 to Riverton’s 10. The Lady Trojans were balanced in the scorebook, with Murphy scoring four and four others scoring two points in the third. Morgan Herlocker started the fourth quarter with a layup and free throw after being fouled on the make. Her basket gave the Lady Trojans a 30-point advantage, initiating a running clock for the rest of the fourth quarter. Herlocker went on to score a total of 10 points in the fourth, and the Lady Trojans cruised to a 70-31 victory, their most dominant of the season. On senior night, it was fitting for Morgan Herlocker to lead Girard with 16 points, followed by Murphy with 14 and Ray with 13. The win puts the Lady Trojans at 4-2 in league play, and 11-8 overall. 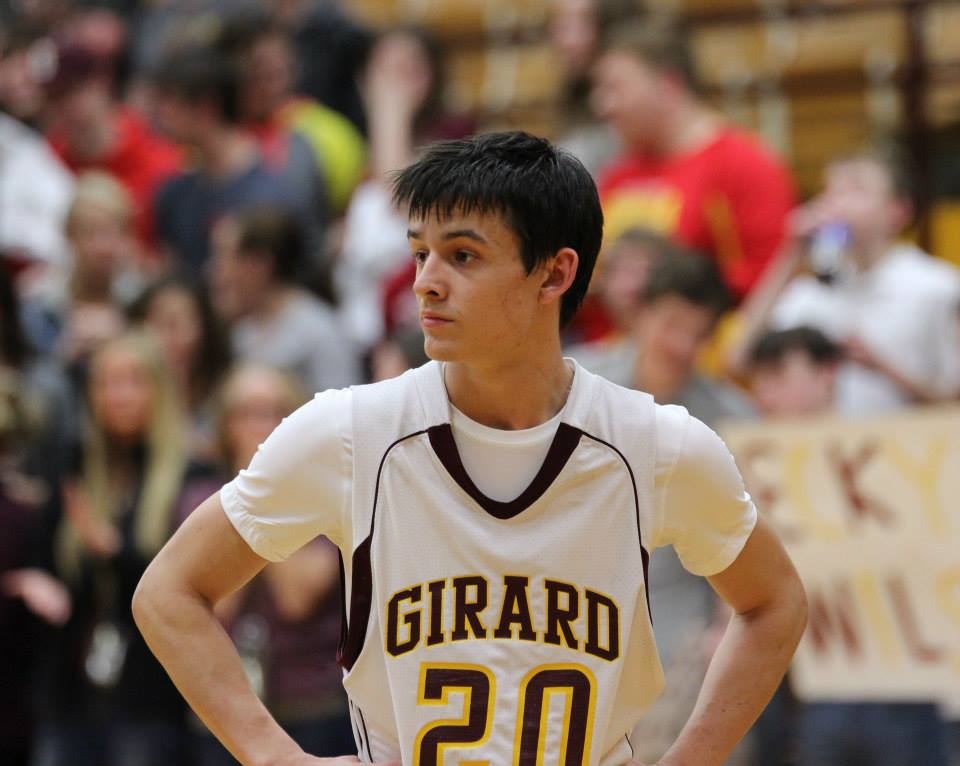 Eric Wilson led the Trojans for the second straight game in their win over Riverton. Wilson had 18 points on the night. PHOTO BY JOYCE KOVACIC 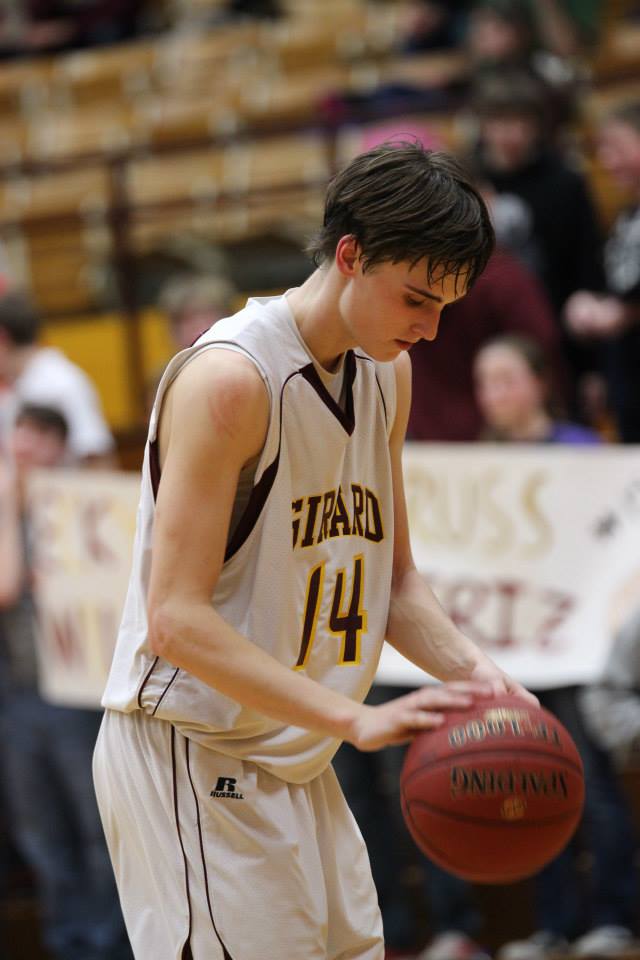 Drew Davied hits a free throw with .4 seconds left in the game. Free throws were key in the Trojans victory over the Rams, making 10-12 down the stretch. PHOTO BY JOYCE KOVACIC

The boys game was quite the opposite of the girls game. It was a competitive matchup for four quarters, and a treat to watch. Eric Wilson’s second basket of the night gave Girard a 4-2 advantage early on, but the Rams used a 6-0 run to take an 8-4 lead. A Wilson layup fed by a slick behind-the-back pass from Laike Damman tied the game back up. Wilson was fouled on the made field goal, and hit the free throw to give the Trojans a 9-8 lead. They wouldn’t see another lead for most of the game. At the end of the first, Riverton held a 19-15 lead. An old-fashioned three-point play from Drew Davied tied the game at 20-20 early in the second, but Riverton scored the next four points to control the lead again. The Rams seemed to answer all of Girard’s mini-comebacks throughout the night. Each time the Trojans would cut it close, Riverton had an answer for it.

Down four points, Wilson nailed a triple for Girard, only for the Rams to go on another 4-0 run to take a 28-23 lead. The Trojans kept battling, and with three seconds left on the clock, Damman set his feet for a deep three-point attempt and sunk it, nothing but net. The lead was cut to just two points, 32-30, for the Rams entering the break.

Wilson started the third like he did the first and second quarter, being the first player to score. His two points tied the game at 32-32. With 4:53 left in the third, Girard took a timeout after Riverton pushed their lead to five points yet again. The Rams and Trojans traded baskets until the end of the quarter, when Davied hit a layup to end the third. Davied’s basket brought Riverton’s lead to 40-39 entering the fourth. A Davied layup and two free throws from Wilson gave the Trojans a 42-40 lead with 6:42 left in the game. After trading a few baskets, Riverton took the lead again at 46-44 with just under three minutes to play. With 2:05 left, Damman snatched a rebound and took it coast-to-coast for the layup to put Girard back on top. Free throws would be huge in the final two minutes. Riverton would miss a few, and Girard finished 10-12 from the free-throw line at the end of the game. Holding just a one-point lead with 35 seconds remaining, Tyler Green hit both of his free throws to give the Trojans a 51-48 lead. Fifteen seconds later, it was Junior Lindloom’s turn at the line, and his free throws gave Girard a five-point lead. Wilson hit two free throws with 10.8 seconds left to give the Trojans a five-point lead yet again, but with 1.4 seconds left Riverton sunk a trey to cut the lead to two points. With just .4 seconds left on the clock, Davied stepped up to the line. Davied hit the first, giving the Trojans a 56-53 lead. Davied missed the second, and after a Riverton rebound and timeout, the Rams still had .4 seconds to score three points. Green intercepted the inbounds pass, and Girard completed their three-point victory. With the win, the Trojans are 6-0 in league play and 17-2 overall. Eric Wilson led Girard for the second straight game with 18 points, followed by Davied with 15, Damman with 8 and Green with 7.

Girard will travel to Baxter on Tuesday for their final games of the regular season.