Trojans round up Wilson County Classic 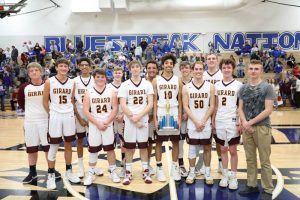 After a prolonged week of competing, the Girard Trojans looked to close out the Wilson County Classic with a bang in the final night of play, Jan. 18.

For the Lady Trojans, following last years’ performance, Girard captured their third consecutive Wilson County title. This year, the Lady Trojans competed for third place after a 57-34 loss to a very well-rounded Goddard team in the semifinals.

In their third-place matchup, Girard (7-2) faced the scrappy, energetic Iola Fillies (5-5) as it was a close contest throughout.

Iola captured a 7-0 run to start the game converting inside the paint and drawing fouls. Girard wouldn’t let the Fillies score another basket the rest of the quarter, getting the Trojans back within reach.

In a close contest, neither team let up defensively as baskets came at a premium in the first half. But the Lady Trojans duo of senior Kalyn Flaharty and sophomore Jaada Valley would take over offensively, executing in transition as well as off second-chance efforts.

The Lady Trojans maintained their energy defensively as they led 19-14 at the half.

Valley continued her attack inside as the Fillies had a hard time containing the sophomore.

Heading into the fourth, Girard held a comfortable 30-23 lead, but the Fillies weren’t backing down yet. Iola went on a 9-2 run to start the fourth with momentum swinging in the Fillies favor.

Junior Brittley Bailey got going offensively after a quiet first three quarters. She would later leave the game with an ankle injury and would not return. Girard was not able to execute on free throws, giving Iola an opportunity to tie the game with seven seconds left. The Fillies then sunk in a buzzer-beating three tying the game at 37 as the game went into overtime.

Both teams exchanged baskets throughout the fourth. Senior Jordanne Ferguson sunk a free throw then right after deflected a pass giving the Fillies a shot at another game-winner with one second left. The Lady Trojans (8-2) went on to defeat Iola (5-6) 42-40 capturing a third-place finish to the Wilson County Classic.

“I think these games, even though they look a little rough, are going to pay off for us down the road when we are in other close games,” said Coach Brad Herlocker.

In the boys’ matchup, the Trojans found themselves in the championship after outscoring their previous two opponents 135-61. Girard (9-0) met with Yates Center (10-1) in a highly anticipated game.

Yates Center brought the energy as their fans traveled well bringing the noise. Key senior starters Carter Doherty and Evan Troike got into early foul trouble in the first but the Trojans were able to maintain a 13-9 lead.

Senior Caleb Muia got going in the second as his second chance efforts helped him get to double digits (10) before halftime. After going on an 8-0 run, the Trojans led 24-15 at halftime.

There was no stopping the Girard up-tempo offense in the second half as the Trojans got it going offensively.

Masterful passing from Troike led to Muia cutting on the backside for a high-flying alley-oop which ultimately silenced the energetic Yates Center team.

“Got off to a little bit of a slow start, but we were able to weather the storm and hang in there,” said Coach Rod Wescott.

Girard had six players finish on the all-tournament team for the boys and girls; Ferguson, Valley, Sands, Muia, Troike, and Doherty.

The Trojans will travel for their next matchup as they face the Baxter Springs Lions Tuesday, Jan. 22.