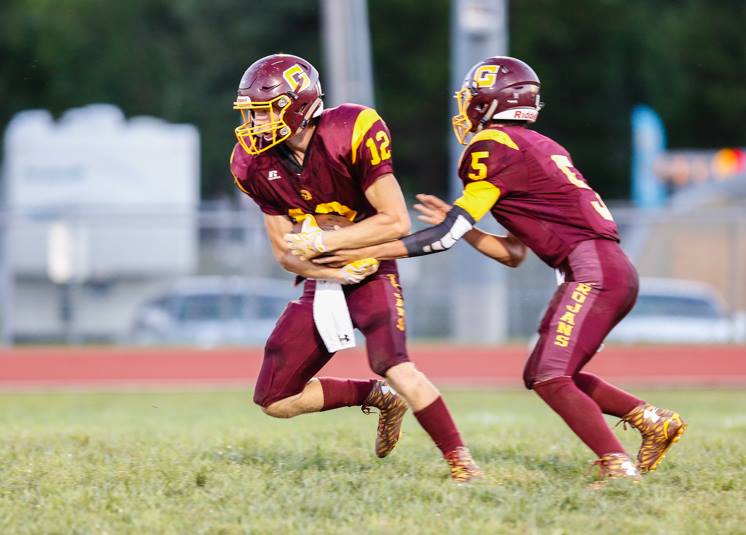 Quarterback Eric Wilson hands off to running back Skyler Schupbach in the Trojans 24-14 loss vs. Galena on Friday. PHOTO BY RON GATES

Trojans fall to 1-1
Girard hosted Galena Friday night for their home opener. The CNC opponents entered the game with a 1-0 record, and it was the Bulldogs who remained perfect in the young season. Galena outgained the Trojans by 107 yards and left with a ten-point victory, but the game was a dogfight and easily could have been closer than a ten-point margin.
In the first quarter, Girard gained an even zero yards in their three possessions, all of which ended in a punt. Galena turned the ball over on downs and punted in their first two drives of the game, and the first quarter ended in a 0-0 tie.
Galena’s first drive of the second quarter resulted in a touchdown after an 18-yard run set the Bulldogs up to punch it into the endzone from one yard out. Galena took a 6-0 lead with 11:45 to play in the half. Punts were traded from both teams on their ensuing drives. Girard found themselves facing a fourth down from their own seven yard-line and were forced to punt. The Bulldogs took the punt and returned it for a touchdown to take a 12-0 lead with 5:00 left before halftime. The Trojans began the next drive on their own 33, but quarterback Eric Wilson was intercepted on the first play from scrimmage. With Galena starting their drive inside Trojan territory, Teddy Paoni came up with a slick one-handed interception to give the ball back to Girard.
Facing a third-and-four inside Galena’s 15, Trey Eaton picked up nine yards and a first down to bring Girard closer to putting points on the scoreboard. Three plays later, Wilson connected with Jordan Hopson on fourth down for a three-yard touchdown pass with 24 seconds before halftime. The Bulldogs took a 12-6 lead into the intermission.
After the Bulldogs were forced to punt on their first drive of the second half, Girard returned the favor. A Trojan personal foul on Galena’s ensuing possession set up a three-yard touchdown run, and the Bulldogs took an 18-6 lead with 3:26 left in the third. Less than thirty seconds ran off the clock before a response from Girard. After a Bulldog penalty for unsportsmanlike conduct, Eaton took a first-down carry 50 yards for a touchdown to put the Trojans down by just one score again. With just under 3:00 to go in the third, Galena led 18-12.
The Bulldogs quickly had the ball back into Trojan territory. Girard tried to keep the momentum on their side, and the game almost took a huge turn in the Trojans’ favor when a Bulldog fumble was forced. Unfortunately for Girard, the Bulldogs recovered their cough up. Three plays later, Galena found the endzone from four yards out and took a 24-14 lead.
Down by 10, Girard was forced to punt on their first drive of the fourth quarter. After Forcing Galena to turn the ball over on downs, Girard faced its last chance to get back in the game. The Trojans used pass completions of 26 and 31 yards, both caught by Junior Lindbloom, to end up on Galena’s seven yard-line. Facing a fourth down, Wilson was intercepted by the Bulldogs with just under two minutes to play and the Bulldogs were able to run the clock out.
Galena rushed the ball 52 times for 259 yards compared to Girard’s 24 carries for 82 yards. The Bulldogs were 1-7 in the passing game for just four yards, while the Trojans completed five of nineteen passes for 74 yards.
Girard will take their 1-1 record to Baxter Springs next week. The Lions began their season with a 32-7 over Southeast before losing 46-6 to Colgan in week two.