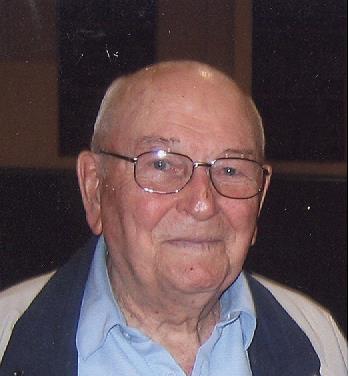 Tom was born May 7, 1922 in Farlington, Kansas, a son of Donald D. and Nettie (Cooper) Pyle.  He attended Farlington Grade School and as a sophomore, he moved to Grass Valley, California and completed his education.
In 1939, he worked in a gold mine in Grass Valley before working at Douglas Aircraft in Long Beach, California until 1943.
He served in the US Navy from April 8, 1944 until May 9, 1946 in the Asiatic-Pacific area and in the liberation of the Philippines.  Tom served in the US Army from October 1, 1950 until September 22, 1951. He received an honorable discharge from the Navy and the Army.
Tom married Johnnie Agnes Rowland on April 1, 1947 in Fort Scott, Kansas.  Johnnie preceded him in death on March 28, 2006.
After their marriage, they lived in Girard before moving to Farlington in 1953.
Tom worked as a farmer and manager of the Producer’s Coop Station in Girard for 12 years.
Tom and Johnnie moved to Great Bend, Kansas in 1971 and retired back to Girard in 1983.
Tom was a member of the United Methodist Church in Farlington and he enjoyed his family, playing golf, sports, and playing Bridge and other card games.
Survivors include his daughters Donna Goodwin, and her husband, Steve, of Wichita, Kansas; Judy Brooks, and her husband, Junior, of Girard; grandchildren Brent Zettl, Jamie (Brooks) Bicknell, and her husband, Sheldon, and Kristen (Zettl) McCoskey; great-grandchildren Brittny Zettl and Cooper McCoskey; great-great-grandson, Braylon (Zettl) Barnes; brother Don Pyle and his wife Marie of Girard; sisters-in-law Lucy Pyle of Girard, Judy Pyle of Florida, and Virginia Rowland of Arma, Kansas; numerous step-grandchildren, nieces, nephews, and cousins.
Tom was preceded in death by his parents and his brothers James, Bob, and Jackie Pyle.
Funeral services will be at 11:00 a.m., Wednesday at the United Methodist Church in Farlington with Pastor Dallas Peterson officiating.  Burial will be in the Farlington Cemetery with Military Honors by the Brown-Bishop Post No. 704, Veterans of Foreign Wars, Parsons, Kansas.
The family will receive friends from 6:30 p.m. until 8:00 p.m., Tuesday at the Smith-Carson-Wall Funeral Home in Girard where friends may call after 2:00 p.m., Tuesday
Memorials are suggested to the United Methodist Church in Farlington and these may be left at the church or the Smith-Carson-Wall Funeral Home, 518 W St. John, Box 258, Girard, 66743.
Condolences may be sent to www.wallfuneralservices.com