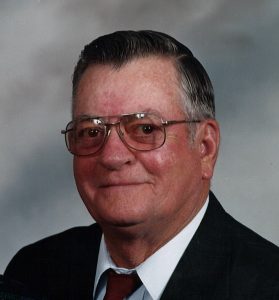 He was born October 12, 1939 in Cherokee, Kansas, a son of Clinton M. and Xenia (Marshall) Allen.  He grew up at rural Cherokee and graduated from Crawford High School in Cherokee.  He attended Vo-Tech school at Kansas State Teacher’s College in Pittsburg, Kansas.

Gene worked as a manager in the feed plant at Producers Coop in Girard from 1963 until his retirement in 2002.

He enjoyed his family, fishing, bowling, and taking trips with Judy.

Funeral services will be at 2 p.m., Sunday at the Smith-Carson-Wall Funeral Home in Girard with Pastor Dallas Peterson officiating.  Burial will be in the Girard Cemetery.

The family will receive friends from 1 p.m. Sunday until service time at the Smith-Carson-Wall Funeral Home where friends may call from 3 until 8 p.m., Saturday and after noon on Sunday.

Memorials are suggested to Harry Hynes Memorial Hospice and these may be left at the Smith-Carson-Wall Funeral Home, 518 W St. John, Box 258, Girard, 66743.

Condolences may be sent to www.wallfuneral services.com