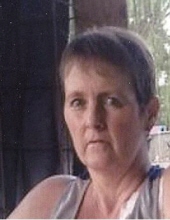 She was born August 28, 1964 in Nevada, Missouri, a daughter of Gary and Sharon (Neil) Puffinbarger.
Christy grew up and attended schools in Kansas City, Kansas before moving to the Girard area.
She worked as a waitress at Nick’s Restaurant, Barbie Jo’s Restaurant, and Celebrities Restaurant, all of Girard. She worked for over 12 years at the Apico Printing Company in Girard.
Christy married William Cambers on April 28, 1993 in Las Vegas, Nevada. He survives of the home.
She enjoyed her family, especially her grandchildren, flowers, gardening, and canoeing.
Christy is survived by her husband, of Walnut, a daughter, Natasha Skaggs, and her fiancé, Brandon Krebs, both of Fort Scott; grandchildren Kami K. Johnson and Hayden Skaggs; her mother and step-father Sharon and Charles Scoby of Walnut; brothers Greg Puffinbarger, and his wife, Teresa, of Brazilton and Rodney Smith, and his wife, Tina, of Gardner, Kansas; sisters Melanie Crumby, and her husband, Bobby, of Fort Scott, Sabrina Smith of Stanley, Kansas and Vanessa Landreth, and her husband, Ed, of Walnut.
She was preceded in death by an infant brother, Jodie Lynn Puffinbarger, step-father, Clyde Smith, and her grandmother, Sarah Belle Humble.
Services for Christy Kay Cambers will be at 10:30 a.m., Tuesday at the Smith-Carson-Wall Funeral Home in Girard with Pastor Rick Prideaux officiating. Burial will follow in the Girard Cemetery.
The family will receive friends from 7:00 until 8:00 p.m. Monday at the Smith-Carson-Wall Funeral Home where friends may call after 1:00 p.m., Monday.
Memorials are suggested to Christy’s Grandchildren’s Education Fund and these may be left at the Smith-Carson-Wall Funeral Home, 518 W. St. John, P.O. Box 258, Girard, Kansas 66743.
Condolences may be sent to www.wallfuneral services.com.