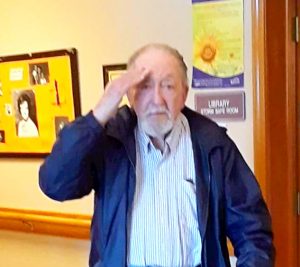 He served in the US Army during W.W.II as a tank gunner.

Bill worked as a flight line mechanic for the Boeing Aircraft Company in Wichita from 1948 until retiring in 1986.  He and Cliffie moved to Girard in March of 2012.

Bill enjoyed auto racing, fishing, guns and he was a gunsmith.  He was a member of the National Rifle Association.

Bill was preceded in death by his parents, his brothers, Jack, Dean, Wendell, and Bob DeMoure, and a great-granddaughter.

Funeral services will be at 11 a.m., Thursday at the National Cemetery in Fort Scott, Kansas with Pastor Mike Buckamneer officiating.  Friends are asked to meet at the cemetery.

Services are under the direction of the Smith-Carson-Wall Funeral Home in Girard.