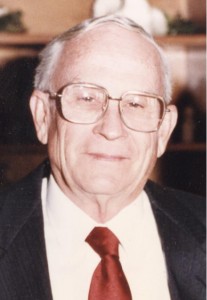 Twarog, 91, 706 N. Leonard, Girard, Kansas, died at 10:00 a.m. Thursday October 23, 2014.  He had been in failing health for the last six weeks.
He was born July 29, 1923 on a farm in Bad Ax, Michigan, a son of William and Pauline Twarog.  He grew up on the farm and joined the US Marine Corp when he was 19 years old.  He fought in WWII as part of the 3rd infantry division and fought in the battles of Bogansville, Guam and Okinawa.  He was wounded in action on the island of Okinawa.  He received an honorable discharged with a Purple Heart and special accommodation from the commanding officer.
He married Wilma Gillard on August 8, 1945 while recovering from an inoperable wound received during the battle.  They were married for over 50 years and she preceded him in death on March 14, 1996.
They made their home in Saginaw, Mi., where they lived for 22 years till 1967.  During this time he worked as a tool/dye craftsman at General Motors Transmission Division.  In addition, he had his own construction company which built residential homes.
In 1967 they moved to Girard and founded TWG Nursing Home, Inc. where he served as administrator.
He was a member of St. Michael’s Catholic Church in Girard, the George C. Brown Post No. 26, American Legion and the Steven Bennefeld Post No. 7479, Veterans of Foreign Wars, both of Girard.
Survivors include sons:  John Twarog, Jr. and his wife Sharon of Girard and David Twarog and his wife Mary of Girard;  grandchildren:  Meryl Perez and her husband Anthony of Sacramento, California, Carly Twarog of Kansas City, Kansas., Jared Twarog of Girard, and Aaron Twarog of Girard.
John was preceded in death by his parents, his brothers, Joseph and Walter Twarog and one sister, Lottie Bistrisky.
Funeral Mass will be at 10:00 a.m., Saturday at St. Michael’s Catholic Church in Girard with Fr. Roger Lumbre as celebrant.  Burial will be in the Girard Cemetery with military honors given by the Brown-Bishop Post No. 704, Veterans of Foreign Wars of Parsons, Kansas.
The Rosary will be at 7:00 p.m., Friday at the Smith-Carson-Wall Funeral Home in Girard where the family will receive friends following the Rosary.  Friends may call after 2:00 p.m., Friday at the funeral home.
Condolences may be sent to www.wallfuneralservices.com