Chrisana Maurer drives to the basket in the Lady Indians perfect season finale win over Colony-Crest on Thursday night. Maurer had 10 points in the victory. PHOTO BY RANDY STONEKING

St. Paul wrapped up the regular season on their home floor Thursday night with a league matchup versus Colony-Crest. The Lady Indians used an outstanding first half and an equally impressive third quarter to cruise to a dominant 70-19 win over the Lady Lancers. The boys were on the other side of the win/loss column, losing to the Lancers in the nightcap.

Lady Indians
St. Paul ended the first quarter up 15-4 before unleashing an explosive offensive attack in the second. Seniors Jordyn Tuck and Josie Albertini hit two triples apiece in the 26-point quarter. Tuck scored 11 of her 15 points while Albertini accounted for 8 of her game-high 18 points. At the break, the Lady Indians held a 30-point advantage.

The offense stayed hot in the third, as St. Paul put 23 points on the scoreboard led by seven from Albertini and six from senior transfer Chrisana Maurer. Junior Aubrey Gahman kept up with her first-half pace from behind the arch, as she knocked down her third trey of the game. The Lady Indians cruised to the blowout victory, completing their undefeated regular season.

Aubrey Gahman hits one of her three 3-pointers in the Lady Indians rout of Colony-Crest on Thursday night. Gahman finished with 11 points. PHOTO BY RANDY STONEKING

With Three Rivers League teams Pleasanton, Chetopa, and host Marmaton Valley entering the same substate bracket, the Lady Indians are in familiar territory. They received a first-round bye and are preparing for a March 4 matchup with the winner of Flint Hills and Marmaton Valley.
The veteran-led Lady Indians are searching for their third state playoff appearance in as many years. While a perfect regular season record proves St. Paul to be the favorites, the spectacular season will turn to disappointment if they don’t come out of this bracket on top. They should have no problems in doing so.

Boys
The more youthful St. Paul Indians ended their regular season with a loss to the Lancers, but still earned a two-seed in their respected substate bracket. Colony jumped out to a huge 25-8 lead after one quarter of play and while the Indians outscored their opponent by three points the rest of the game, it wouldn’t be enough to surpass the 17-point deficit felt after eight minutes. The Lancers took a 67-53 victory.

St. Paul was led in scoring by Braven Born and Brenden Doherty, who each scored 14 points in the loss while each hitting a pair of triples in the game. The loss dropped the Indians to 8-11 on the season, but their second seed earned them a first-round bye at substate. Since Chetopa didn’t field a team this season, three-seed Southern Coffey County (5-15) will be the next opponent for St. Paul.

The Indians made it as far as the substate championship in 2015 and will look to get back next week. 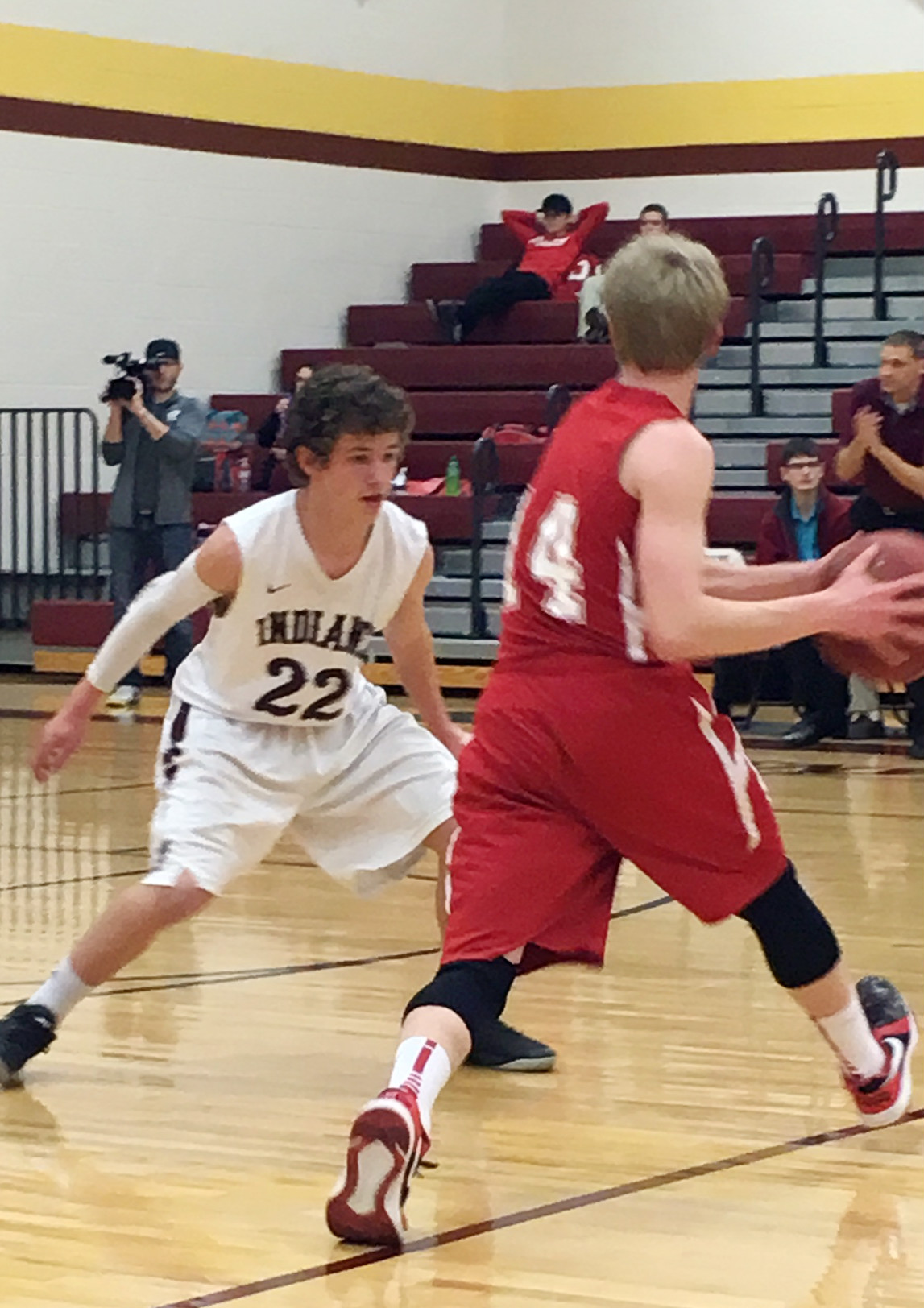 Braven Born (L) had 14 points in the Indians season finale loss to Colony-Crest. St. Paul finished the season at 8-11 but will still boast the two-seed in their substate bracket along with a first-round bye. PHOTO BY ASHTON WOOD