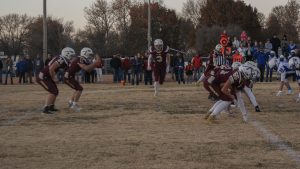 Senior Hayden Smith rolls in motion during an offensive play for the Indians in their sectional matchup, Nov. 15, against Hanover where the Indians fell 62-30.

In the previous week for St. Paul, Nov. 8, the Indians were able to narrowly escape Waverly 28-18 advancing to the 8-Man DII Sectional. Friday, Nov. 15, the undefeated Indians (10-0) stayed home for their sectional were the team facing three-time defending state champion, Hanover (9-1) as the winner advanced to sub-state.

Opening the first quarter, Hanover came out swinging scoring 16 points unanswered in the first three minutes of the game including; 67-yard kickoff return opening the game as well as a 55-yard hook and ladder pass.

St. Paul trimmed the lead on their second offensive drive striking on an 8-yard run up the middle from senior Easton Dent. Converting on the two-points, the Indians trailed 16-8 with six minutes remaining in the first. Shortly following the Indians’ touchdown, the Wildcats responded with a 53-yard pass on a post route for a Hanover touchdown.

Senior Adam Albertini provided much-needed energy for the Indians midway through the first as the agile quarterback found his way into the endzone for a 35-yard run, trimming the Wildcats lead to 24-14.

Opening the second quarter, Albertini trimmed the lead on a 6-yard touchdown with Dent converting the two points on a run up the middle.

Following halftime, Hanover continued its dominance outscoring the Indians 24-8 in the second half. The lead grew to become too much for an Indians comeback as the Wildcats prevailed 62-30 putting an end to the season for Coach Keith Wiatrak and his St. Paul team who finish the season at 10-1.

“Couldn’t be more proud, they fought hard all the way through,” said Coach Keith Wiatrak. “You have to make big plays and things have to go your way to beat teams like that. You can’t beat teams giving up big plays.”

In the four years the group has played together they’ve racked up an impressive resume including; only losing seven games through four years, never losing a league game, three-time district champs and been in the final eight all four years.

“You have kids who play hard for you all four years and you hate to see them go,” said Wiatrak. “I’ve told everybody for a long time I thought this year would be another chance for us to make a run at it and you know we just fell a little short. I’m going to miss these seniors.”