← Are you hosting a holiday meal?
Indians fall in sectional →

NFL Hall of Famer and Kansas City Chiefs Super Bowl winner, Bobby Bell, will be speaking in Pittsburg on Wednesday, December 4. The keynote for the Mpix.com Celebration Banquet, Bell will speak to the NJCAA Football Championship participants, No. 1 Mississippi Gulf Coast and No. 2 Lackawanna (Pa.). Bell won a collegiate national championship in 1960, won a Super Bowl in 1970, is a 2015 college graduate, and takes pride in breaking barriers and proving that dreams do come true. 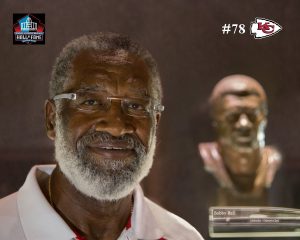 The Mpix.com Celebration Banquet will be held Wednesday, December 4 at 6 p.m. CST at the Pittsburg Memorial Auditorium. Tickets to the banquet are available to the public for purchase on a first come, first served basis. Banquet tickets are $25 each, and can be ordered by emailing Devin Gorman of the Crawford County Convention and Visitors Bureau at dgorman@visitcrawfordcounty.com, or call 620-231-1212.

The NJCAA Football Championship is scheduled to kickoff at 5 p.m. CST on Thursday, December 5 at Carnie Smith Stadium on the campus of Pittsburg State University. General Admission tickets are $15 each, with $10 tickets for children 17 and under, and college students who provide their school ID. Game tickets may be bought at the game, or in advance through the Pittsburg State Ticket Office, online at PittState.edu/tickets or by calling their office during regular business hours at 620-235-4796.

Born in Shelby, North Carolina, Bobby Bell was an All-State quarterback in high school. He wanted to attend Duke or North Carolina, but could not because of his race. Instead, he was recruited to play for the University of Minnesota by head coach Murray Warmath. Bell was converted to an offensive lineman, then defensive lineman, and was an All American his junior and senior years. That senior year, Bell won the Outland Trophy, placed third in Heisman Trophy voting, and their 1960 Rose Bowl win earned the Gophers the National Championship.
Drafted by the NFL’s Minnesota Vikings, Bell instead signed with a team in a league nobody thought would succeed. He was drafted by Hank Stram and the Kansas City Chiefs of the AFL. He was converted to a linebacker, and in 12 seasons with the Chiefs, he was an eight-time All Pro and an NFL Defensive Player of the Year.

Bell played in the first Super Bowl, matching the best team from the NFL with the best team from the AFL. His Chiefs lost to the Green Bay Packers and Vince Lombardi, but, four years later, in Super Bowl IV, his Chiefs upset the team who drafted him out of the same community where he won a college national championship – Minnesota.
The University of Minnesota has had a football program for more than 135 years, and only five jersey numbers have been retired, including Bell’s #78. Bell is a member of the Rose Bowl Hall of Fame and the College Football Hall of Fame. He is in the Chiefs Hall of Fame, and is a member of the Ring of Honor in Arrowhead Stadium. He is a member of the AFL All-Time Team, and in 1983, he was the first Chiefs player to be inducted into the NFL Hall of

Years after he left college to pursue his professional football career, then opening a chain of barbecue restaurants, Bell fulfilled a promise to his father. He returned to the University of Minnesota to finish his degree. For his degree, he researched and wrote a 45 page manual on the fundamentals of youth football; and, created and operated a youth football camp. That camp was held in 2014 in Pittsburg, Kansas.

Fifty-six years after starting at the University of Minnesota, in 2015 at the age of 74, Bobby Bell earned his bachelor’s degree.