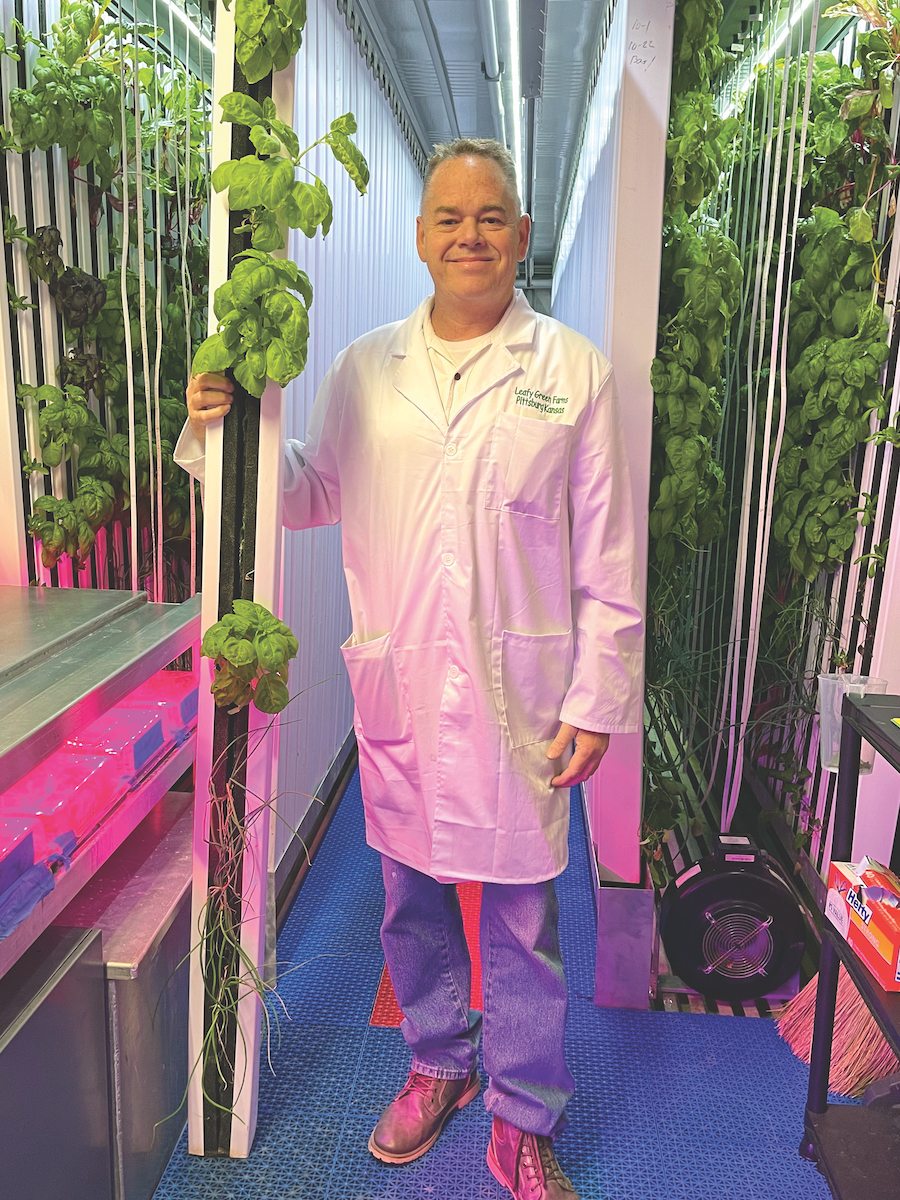 “A high tide raises all boats in the harbor,” says Brad Fourby, owner and operator of Leafy Green Farms LLC in Pittsburg, Kansas. That’s the way he’s been operating his business since he launched it in 2020. He has been using his ideas and expertise to benefit the residents of Pittsburg and surrounding areas.

While it’s no secret that Crawford County is a high producer of crops, what we oftentimes fail to realize is that what is grown here is not consumed here. According to the Kansas Health Foundation, an estimated 800,000 Kansans live in food deserts. For rural areas, the USDA defines food deserts as places where a third of the population resides over 10 miles from a grocery store. And even then, what we see for produce in the grocery store is not the freshest of options, according to Fourby. “Most of what we see is being grown in Mexico, processed in California, and transported to Kansas.” The vegetables must be picked early to ensure they are not spoiled by the time they get to Kansas, which can take a week or two. “The food gets sprayed when you cross the state lines, so even the organic options will have chemicals,” says Brad. Highly nutritious vegetables are not as accessible to everyone in the Midwest as they are to people in California where Brad, a transplant himself, is from. Through his work in California, he became acquainted with Rob and Sara Morris, owners of Energy Group Consultants in Pittsburg, and began brainstorming the idea of farm-to-table produce. As Brad visited Pittsburg a few times, he enjoyed the area and was hooked. In the middle of a pandemic, he packed up and journeyed the 1,842 miles from Sacramento to Pittsburg and settled in, getting to work, and creating what would become the only hydroponic shipping container farm in Kansas.

But getting his start was not easy. During the pandemic, no one was taking in person meetings. He describes being quickly shut down by many banks and city offices when they heard that a California man was looking to grow some leafy greens. “People didn’t take me seriously,” he describes as he went from one place to another with a binder full of hopes and ideas. Some even went as far as to tell him his ideas simply would not work, that they could not work. How can one person grow 500-700 heads of lettuce per week, with no soil, no herbicides, no pesticides, and with only 10 gallons of water per day (95-99% less than traditional farms), year-round? Furthermore, how could all this be done in only 320 square feet of space? The answer: hydroponics.

Hydroponics is defined as the growing of plants without the use of soil, but instead using nutrient-enriched water. This practice allows for greater space allocation, less labor-intensive growing, and more water preservation. At any given time, Brad has 3,600 seedlings nestled in coco fiber in his shipping container farm. They are placed there as seeds until they sprout two to three weeks later, then are carefully moved to their growing towers until they are harvested by Fourby, which he does weekly. He can control the water distribution, lighting, farm temperature, and any other settings he needs on a mobile app, and from his laptop. The whole thing uses less energy than the average household.

From his harvest, he distributes his produce to food pantries including Sacred Heart in Frontenac, and supplies to local schools. He donates it all, but has been asked to sell to local restaurants, which he declined. “We want everyone to have the opportunity to have good nutrition,” he reasons. “People that can afford to eat well, probably already do. We are here to bridge that gap.” He estimates that per year, in his 320 feet of space, he produces what would normally take two acres. Varieties of lettuce, arugula, and herbs such as chives, basil and much more fill the towers of the container. Brad has even started growing some radishes. All of it is grown, harvested, and consumed within a 25-mile radius, giving it the highly coveted label of hyper-local organic food.

For now, Fourby and his crew plan to build and run two more farms at their location near the airport in Pittsburg. They will be looking into manufacturing the farms for others to utilize across the country, as they have had many requests. In the future, Brad plans to partner with the SAVE Farm in Manhattan, Kansas who works to serve service members, Veterans, and their families in hopes he can provide them with opportunities for farms like his.

With the support of Pittsburg State University, the Pittsburg Chamber of Commerce, and the community behind him, word has started to spread, and more people are contacting Brad to learn about what he is doing, and what they can do too, to be a part. “Many people didn’t know exactly what we were doing, but they were eager to see,” he recounts. And now that they do see, they like it, and interest is growing as quick as Leafy Greens produce itself and Brad could not be more pleased with what he is building for the people of Crawford County and beyond. “You’re fortunate when you get to be spending your days doing what you love.”

©All Rights Reserved, Hometown Girard, 2022. Content may be shared through link to this page, but not reproduced without written consent. Thank you for respecting our rights.