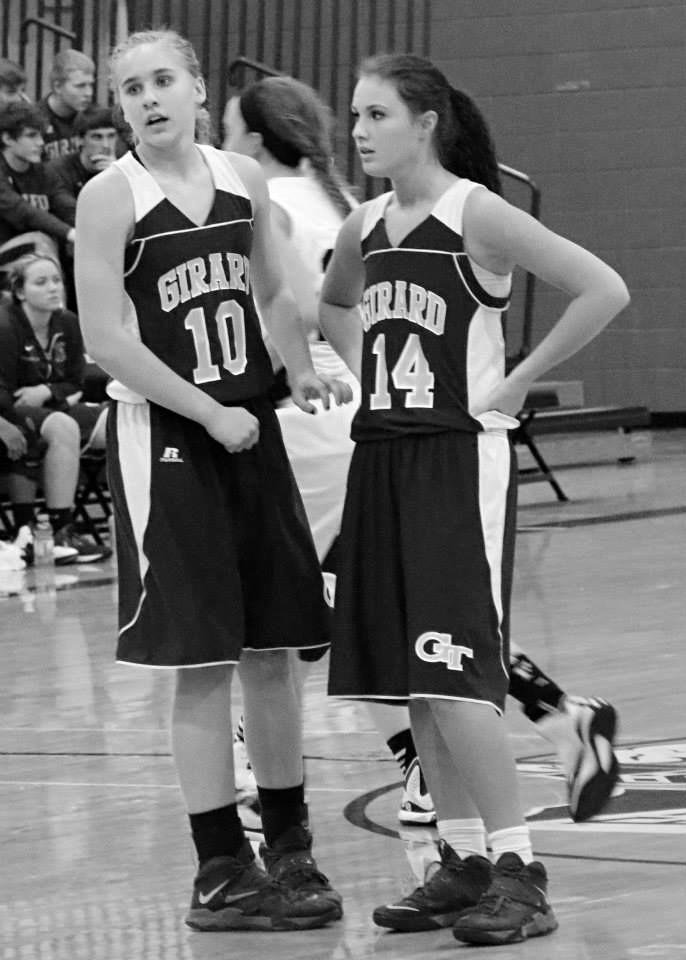 Amidst the cold and short snowfall, Girard traveled to Pittsburg to take on the Colgan Panthers for a pair of league games Tuesday night. The Lady Trojans let their lead slip away and fell in the first varsity game of the night, and the Trojan boys hung on to their small lead for a late-game win.
Six first-quarter points from Ashley Ray led the Lady Trojans to a 15-8 lead at the end of the first quarter, but the Lady Panthers stormed back in the second, outscoring Girard 16-9. The game was tied 24-24 at halftime.

Calea Augustin led the Lady Trojans in the third, scoring eight of her team-high 20 points in the quarter. The Girard players not named Calea added eight points as well, and the Lady Trojans held a 40-36 lead entering the fourth. The Lady Panthers turned it up on both ends of the quart in the final quarter, as they outscored Girard 23-7 to take a 59-47 victory. Free-throw shooting was key in the fourth, as Colgan knocked down 14-18. Girard was just 1-1 in the fourth. Behind Augustin’s 20, Ray scored seven and Sydnee Crain scored six. The loss drops the Lady Trojans to 10-8 on the season and 3-2 in league play. Colgan remains in the driver’s seat for a league title with an unblemished record in CNC play.

Boys win a close one
Two easy layups put Colgan up 4-0 early on in the boys’ game, but two free throw makes from Drew Davied and a trey from Eric Wilson gave Girard a 5-4 lead. The teams were trading points before Tyler Green and Kross Hamblin each hit two-footers to give the Trojans an 11-7 lead entering the second. A Panther three would give Colgan a 14-12 lead in the second, but it would be their last lead of the night. A pair of treys from Davied and Wilson would give the Trojans a seven-point lead at 22-15, but the Panthers answered back with a three of their own. Green and Hamblin were at it again at the end of the half, this time each hitting a free throw to give Girard a 24-18 advantage entering the break.

The opponents went back to trading hoops in the third, and a Colgan trifecta would cut the Trojans’ lead to just one point late in the quarter. With the clock running down, Junior Lindbloom nailed a three with 1.3 seconds left, and Girard led 36-32 heading into the fourth.

Neither team could get anything going in the fourth. Girard scored just five points to the Panthers’ six. Laike Damman hit a free throw with 27.1 seconds left to give the Trojans a four-point lead, but 10 seconds later a Colgan layup made it a two-point game. Davied hit one of two free throws with 15.9 seconds left and a late Panther attempt from three couldn’t find the mark. Girard took a 41-39 victory, improving their record to 5-0 in league play and 16-2 overall.

Girard will host Riverton on Friday night, in what will be their last home game of the season.