The George C. Brown, Post 26 of the American legion, will conduct memorial services with military honors at various local cemeteries Monday, May 27.

Participating community members are to meet at the Legion at 7:15 a.m. and the group will leave for the first cemetery at 7:45 a.m.

A break will occur at the Hepler Community Center at 10:30 a.m. before continuing to the rest of the cemeteries.

The annual Memorial Day ceremony at the PSU Veterans Memorial is planned for 9 a.m. Monday, May 27, with Andy Klenke (Staff Sergeant, U.S. Army) as the keynote speaker.

Klenke is the chair of Technology & Workforce Learning at PSU. His children, siblings, and in-laws include current service members and veterans, and he is a member of the PSU Veterans Memorial Advisory Committee.

The ceremony is open to the public. In the event of inclement weather, it will be moved to the Bicknell Family Center for the Arts, 1711 S. Homer. 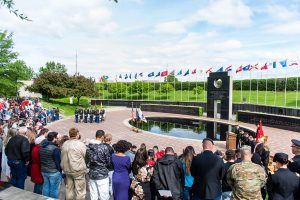 Serving as emcee for the ceremony will be Cadet Anthony Aung, PSU Army ROTC. The National Anthem will be sung by Lisa Gerstenkorn, PSU Music Department faculty, and “Taps” will be played by Will Koehler, a 2011 graduate.

The ceremony also will include a dedication of new pavers, music, and an invocation and benediction by 2nd Lt. Wyatt Presnell, PSU Army ROTC.

Klenke was a Signals Intelligence Morse Code Interceptor with Electronic Warfare training for the U.S. Army from November 1983 to November 1990.

Klenke joined the staff at PSU in 1998 as an associate professor. Prior to that, he was a technology teacher at Chanute High School.