Trojans come up short in first round of state

Girard came into the Class 4A-II state tournament as overlooked underdogs, and after Laike Damman brought the game within three points with a steal and trifecta as the buzzer sounded the end of the third quarter, the momentum was there to capture the first-round victory.  Unfortunately for the Trojans, the Panthers of Concordia rallied in the fourth to take a 77-63 victory. 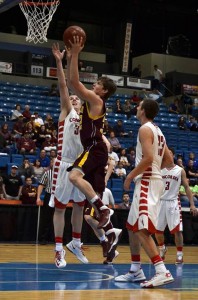 Kross Hamblin, sophomore for the Girard Trojans, lays it in during the third quarter of semi-finals at 4A State. Although the sixth-seeded Trojans pulled within three at the end of the quarter, Concordia prevailed with a 77-63 victory. (PHOTO by Julie Jones)

Girard struggled to find a rhythm in the first as they were outscored 16-9 in the quarter.  They turned to their offensive leader, Drew Davied, and he put in five points, including his first of four three pointers, but the team just did not click right off the bat.  The Panthers had built a 16-7 lead before a Garrett Bailey basket brought the Trojans within seven before the start of the second.

The second quarter flowed better offensively for Girard, but defense was still an issue.  With Davied only scoring two points in the quarter, his teammates stepped up to provide points for the Trojans.  Kross Hamblin and Eric Wilson each scored four in the quarter, while Tyler Green scored three points.  Two free throws from Damman before halftime brought the game to 34-24 going into intermission.

Girard’s offense picked up in a big way in the third, as the Trojans nailed five long balls on their way to outscoring Concordia 23-16 in the quarter.  After a three from Concordia as the initial seconds of the third ticked down, Damman hit a two-pointer to bring Girard within 11.  This started an 11-6 run by Girard, including a two from Hamblin, followed by threes from Davied, Damman, and Wilson in that order.  Wilson’s trey brought the Trojans within just six points.  After a basket from the Panthers, Green brought the game back within six points, while another basket down low from Hamblin and Davied’s third bomb from deep brought the Trojans within six once again.  Then in the waning second of the quarter, Damman turned the ball over to Concordia.  He would redeem himself in a big way as he then stole the ball back and nailed a leaning trey at the buzzer to bring the Trojans within three points, 50-47.

However, Concordia exploded for 27 points in the fourth quarter with 14 coming from the free-throw line.  Girard was forced to play catch up and hope for the Panthers to miss at the line, but it just didn’t happen.  Davied tried to keep his team in it, scoring eight of his team-high 19 points in the fourth, but it wasn’t enough for Girard.  In the end, the 7-seed Trojans would fall to the 4-seed Panthers, 77-63.

The season comes to an end for Girard, but it was a solid season to build on.  Girard will lose one senior in Austin O’Dell, as well as Devin Alters who did not finish the season with the team after his lingering shoulder injury.  Other than those two, Girard will return sophomores Davied, Damman, Green, Bailey, and Hamblin next year.  Hamblin was the only sophomore not to start in the first-round game for the Trojans, but was a key contributor off the bench.  Wilson, a freshman, earned playing time at the end of the season for Girard, and was also a contributor in the state game.  With a year of experience under their belts, look for the young and inexperienced Trojans to come back next year as seasoned veterans.  The Trojans ended the season 12-11.