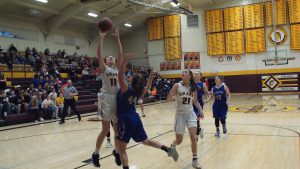 Freshman Serenia Short rises up for a transition layup as Short provided 6 points in the Lady Trojans dominate 64-25 victory over the Riverton Rams, Feb. 25. 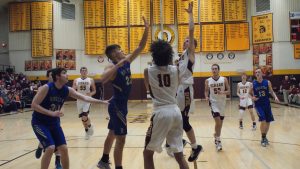 Junior Ryder Worrell puts up a floater in their matchup with the Riverton Rams where the Trojans went on to demolish the Rams 58-23, Feb. 25.

The Girard Trojans tipped-off the first round of sub-state, Feb. 25, on their home court as they faced the Riverton Rams. Winners of both games advance to Caney where the semifinal and the final will be played Feb. 28 – Mar. 2.

For the Lady Trojans, in their last matchup, they suffered a tough 35-33 defeat to the Baxter Springs Lions which placed them as runner-up in the CNC. Monday night, the Lady Trojans came out with an unphased attitude as it was a one-sided game from the tip.

Riverton’s team was only limited to 7 players total as their depth struggled to compete with the full arsenal of the Lady Trojans.

Senior Drake Worrell and sophomore Jaada Valley carried the offense through the beginning of the game scoring more than half of their first quarter points. Freshman Serenia Short provided key baskets off the bench for the Trojans as she has established herself as a key role player in the last couple of games for Girard.

Girard would break the lead open to double-digits early in the second quarter and never looked back from there. At halftime, the Lady Trojans led the Rams 36-17.

In the second half, the Rams struggled to stop the inside attack of senior Kalyn Flaharty as she kept piling on the points in the paint.

Flaharty was the only player to score in double-digits as she finished her night with 12 points for the Lady Trojans. Other key contributors include; Valley (8), Worrell (6), Thomas (6), Short (6), Sands (5).

For the boys, they come off a close, 68-63 OT victory over the Baxter Springs Lions in their last game, Feb. 21, as they rightfully claimed the CNC title.

In the matchup against the Rams Monday night, Riverton had a hard time slowing down the Trojans as Girard continued to push the pace. Senior Evan Troike would start off the game right scoring the first 5 points for the Trojans.

It seemed as if the Trojans could not miss as the buckets kept piling on with Riverton not able to keep up. Two Trojan players would reach double-digits before halftime as Muia ended the half with 17 and Troike scored 10 for Girard.

At halftime, Girard would hold a manageable 36-12 over the Rams.

The Trojans continued to pile on the score off transition baskets as their lead would grow to become too much for the Rams. Girard went on to defeat Riverton 58-23 advancing to the semifinals.

Muia finished the game with 23 points for the Trojans matching his season average. Girard would have two others finished in double-digits; Troike (13), Doherty (11).

For their next matchup, the Trojans will face the winner of Caney Valley vs. Columbus Friday, Mar. 1 with tip-off time TBA.